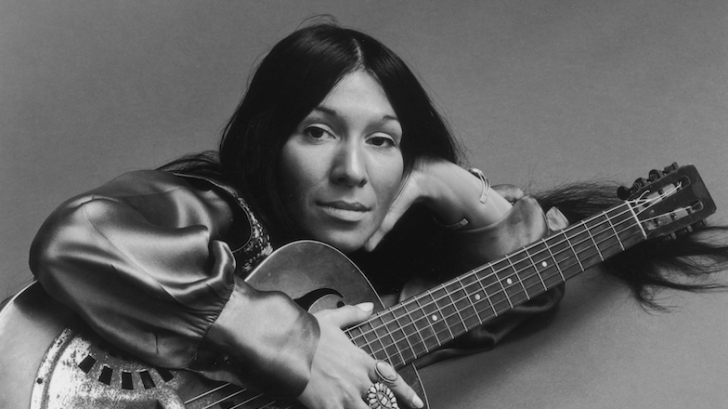 11th March 1969: Portrait of Canadian musician Buffy St. Marie lying on the floor, holding her guitar, her head resting on her palm. She is wearing a long sleeved satin blouse. (Photo by Jack Robinson/Hulton Archive/Getty Images)

An Inspiration To Icons

Buffy Sainte-Marie is a legendary Native American songwriter and activist. She was in the beatnik/activist scene in 1964 where she made friends with Bob Dylan who referred her to the NY Times, when she started to rise to fame. Sainte-Marie was born in Saskatchewan, Canada and became an inspiration to her contemporaries including Joni Mitchell, Neil Young, Janis Joplin, Leonard Cohen, and Johnny Cash. Most of the aforementioned icons also covered her songs or performed in duets with Sainte-Marie.  Even Elvis Presley became familiar with her and covered her song “Until It’s Time For You to Go.”  Buffy Sainte-Marie is a musician’s musician.

Buffy Sainte-Marie started touring as solo artist in 1962. She performed in mostly folk venues and Native American reservations. She landed in Greenwich Vilage, New York where she made her name amongst the biggest names in Folk Rock history.

Buffy was legendary. She was the only representative of Native American culture at the time, and one of the biggest names in Native American music to this day. Sainte- Marie has dedicated her life to bringing awareness to the mistreatment of Native Americans, which sparked major controversy. None the less, she continued her activism and released music like “Now That Buffalo’s Gone” and “My Country ‘Tis of Thy People You’re Dying.”

Buffy was ahead of her times. She started editing and recording her music on Apple and Macintosh products as early as 1981. She received an Academy Award for Best Song in 1982 for “Up Where We Belong” which was used in An Officer and a Gentleman.

Buffy Sainte-Marie was able to adapt to all forms of music and songwriting whether it was Native American folklore on solo tours, working on American Bandstand, The Johnny Cash Show, and The Tonight Show Starring Johnny Carson. She is a hero to women and indigenous people across the world.

Buffy Sainte-Marie was in a class of her own. Her songwriting was unparalleled and was matched with a haunting voice that lingered in the air as she sang passionately.

Her style was not a fashion statement. She was a proud Native American from the Piapot Plains Cree First Nation Reserve in Qu’Appelle Valley in Saskatchewan, Canada.

Sainte-Marie adapted well to all cultures despite her pride. She was a frequent staple in Greenwhich Village during the beatnik scene of the 1960s.

She was the voice of her nation and a legendary performer.