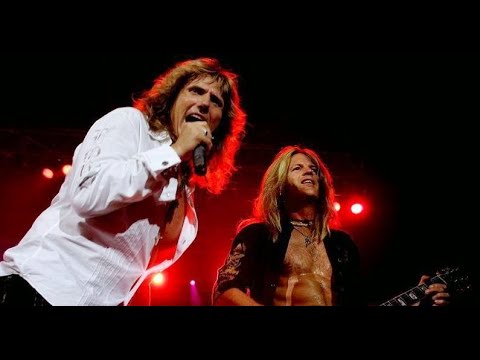 Today we set ourselves the task of collecting the best glam metal bands in history. We know that not all of you are lovers of this musical style. However, it must be recognized that it was the genre that put rock and metal on the map of the massive in the eighties. Of course, there were other subgenres of heavy music, but none managed to reach the popularity that glam metal achieved in the penultimate decade of the 20th century.

Dokken’s album Under Lock and Key (1985) sold a million copies in the United States. But the previous one, Tooth and Nail (1984), contained the single “Into The Fire”, the epitome of their sound: it has a ballad part in the trendy style, a bridge with excellent choirs, a fancy riff in the chorus and a terrifying guitar solo. Goosebumps.

As a good product of the ’80s, it is significant that they broke up in 1989. The guitarist formed Lynch Mob and Dokken reformed the band in 1993, which, with different musicians, continues. Lynch and the singer put aside their mutual hatred and recorded the song “It’s Just Another Day” in 2018.

Although they transcended in the mid-eighties, Quiet Riot had been together for a decade. Randy Rhoads began his career in this band, and later became a guitar god on Ozzy Osbourne’s first two albums. At age 25, Rhoads was the subject of one of the strangest fatal accidents in rock history: at an Ozzy tour stop, Rhoads boarded a small plane, which crashed into the tour bus. The aircraft caught fire and all three occupants died.

Quiet Riot’s was a path full of misfortunes. It was the first heavy metal group to reach number one in sales in the United States, with the album Metal Health (1983). But they went down as fast as they went up. Its singer, Kevin DuBrow, died in 2007 of an overdose when he was 52 years old. When they found him, he had been dead for six days in his apartment.

It becomes complex to reduce the enormous number of glam metal bands to eight, mainly since there were and still are so many of great quality. Ratt is one of the many groups that broke the market in the 80s. With the release of their iconic debut Out of the Cellar, they managed to match those quotas of image and musical quality perfectly. They may not remain as one of the most current acts of the genre today, but they were of vital importance for its development in the past.

Their big hit was “Round and Round” (1984), a rough, sensual swipe that reached number 12 on the US best-selling singles chart.

We have reached a position where it is difficult to prioritize the importance and/or relevance of these artists for the genre. However, the influence that Twisted Sister had on the rock and metal of the time is undeniable. Dee Snider put on the shirt of all the rockers of the eighties and went out to fight against the censorship of the music we love so much.

We’re Not Gonna Take It” (1984) continues to be infallible. At the foot of the canyon. Although they had not performed since 2016, on the Halloween weekend of 2019 they offered three concerts in Tampa. Happily married since 1981 —and the father of four children—, Snider starred in a reality television show in 2010, composed a musical, and in 2018 released his fourth solo album, For the Love of Metal.

Whitesnake is not a hair metal band. Why is it here? Because his most successful stage does belong to that time, the mid-eighties. Always commanded by David Coverdale, an institution within hard rock: he is one of the best rock singers in history.

The first stage of Whitesnake is absolutely wonderful. Strong rock with some soul and blues on records like Trouble (1978) or Lovehunter (1979). But from the hair metal stage, we must choose the ballad “Is This Love?” because it represents a lot of what that movement was. In 2019, 2021, Whitesnake released a new album, Brighton Beach Memoirs, which is not bad at all. Coverdale keeps removing and putting musicians on a whim, but his rock still sounds sexy and vigorous.

The group led by Sebastian Bach was all the rage at the end of the eighties. Although they were a bit late on the glam bandwagon, Skid Row’s 1989 self-titled debut was a worldwide boom. The classic romantic power ballads mixed with the hard-hitting protest tracks were magnanimous marketing ploys.

All this added to the stage and “marketing” presence of the band at that time. Note how we do not refer to any of these groups as “hair metal”, although it is a regularly accepted term. But for heaven’s sake, don’t use it with Bach in the same room.

They may be the most “glam” metalheads in the world. You can start every morning with a cup of warm blood to the tune of “My Funeral” by Dark Funeral. They may be the dirtiest and most rebellious thrashers on the planet… But we’re sure that, at some point in their lives, they enjoyed songs like “Unskinny Bop” or “Talk Dirty to Me” by Poison. Many people blamed Poison for killing metal. Without going any further, Ronnie James Dio himself said those exact words: “Poison Killed Heavy Metal”.

Now we ask ourselves: is it correct to attribute the death of a genre to a single band of a subgenre of the style in its entirety? Each will draw their own conclusions. Of the groups on this list, Poison is the one that best describes the aspect and image of glam metal, and of course, their music is also consistent with these traits.

The demonstration that everything was possible in hair metal until a band succeeded with a name as inappropriate as Cinderella. They arose in Philadelphia and were so good that they had several sponsors. First, Gene Simmons, from Kiss, who sponsored them to take off, then Jon Bon Jovi, who bridged their record deal.

Cinderella only has two really interesting albums, Night Songs (1986) and Long Cold Winter (1988). Ballad specialists—”Don’t Know What You Got (Till It’s Gone)” is a fixture on all metal ballad compilations—its quirk is an interesting bluesy twist, which sets it apart from the rest on this list. We are left with two infallible rock songs, “Shake Me” and “Nothin’ For Nothin'”.

Logical, right? Well yes, friends. No glam metal top is complete without Mötley Crüe at the top. Obviously, the rankings are a matter of personal taste, but there has to be a minimum of objectivity involved. And that same objectivity is what dictates that Mötley Crüe were in charge of giving life to this entire musical movement. Formed in 1981, natives of Los Angeles, California, Vince Neil, Nikki Sixx, and the boys broke into the music market of the time with everything.

Of course, they were recipients of broadsides and waves of mass hate, especially from all the bands that were emerging in the Thrash Metal scene from the same area, a.k.a. the famous “bay area”. Despite all this, the group was able to make its way and establish itself as one of the largest in the history of metal. To this day, everyone is eager to see them return with Def Leppard, Poison, and Joan Jett, as part of the tremendous “The Stadium Tour”.

The group led by Joe Elliot is one of the culprits that today we have so many hits of what is commonly known as “pop metal”. Try to discredit the band however you want, but if you put the word metal on it, you are contradicting your argument, one way or another.

The band started in the late seventies, but it wasn’t until their legendary 1987 Hysteria that they achieved their worldwide claim to fame. To this day, they fill arenas and stadiums all over the world, and precisely their next one. Def Leppard has the most number ones on this list. Hysteria album, an album that some called “the Thriller of heavy metal”, due to its complex elaboration. The group did the opposite of what the orthodox like: they recorded with all the musicians in the same room and in a couple of takes. Hysteria was crazy, with layers and layers of sounds, tricks, with details that took days. It paid off: it’s one of the best-selling hard rock records in history.