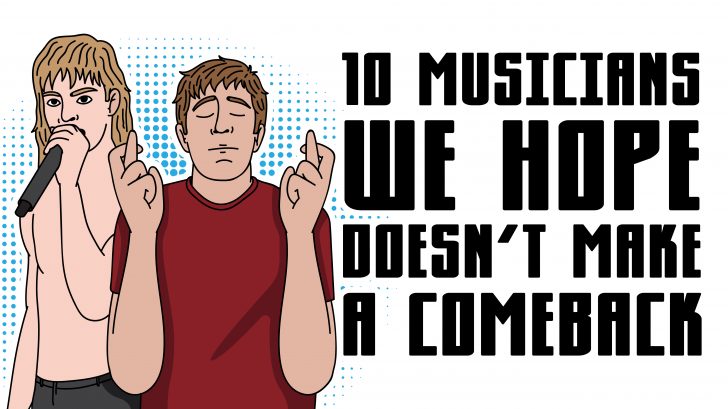 There are rock bands and artists who made a few musical mistakes and released one bad album or two. Meanwhile, on the other side of the spectrum, there are those we wish we never heard about. We want to play nice and all but they’re seriously an embarrassment to rock ‘n roll – not all but majority of the groups on this list. Most of them made it big and we still wonder why.

These musicians fall under either of two categories – talented and with plenty of potential but their music just sucks OR zero talent who got lucky and hit the jackpot. Once upon a time, their songs were inescapable – on heavy rotation in both radio stations and on MTV. And now, with classic rock groups reuniting left and right and other rock acts making comebacks, here’s a list of those we wish would stay away from the limelight. Once is enough.

P.S. We didn’t include Nickelback because unfortunately for us, they’re still around.

When we found out that Jonas Brothers’ music was described as pop-rock or soft-rock, we felt as if we didn’t know anything anymore. We were as confused as the time Beyonce got nominated for Best Rock Performance. Then again, Jonas Brothers ‘won’ the ‘Worst Band Award’ so that’s the silver lining.

They sold more than 17 million records worldwide but in 2013, they decided to part ways due to ‘creative differences.’ Well yeah, okay.

“I think it was time, and for us it took some time getting there, but we feel like it’s time that the Jonas Brothers come to an end.” – Kevin Jonas in an interview after the split

Thank god they came to that conclusion. Look, we don’t have an issue with their music per se but calling themselves a rock band is just a bit of a stretch, don’t you think?

Maybe they can just stick to bubblegum pop and the like.

Spin Doctors’ biggest hit “Two Princess” isn’t even a good song. But its massive success was because the track is an earworm. You may hate it but once you hear it, it’ll likely stay in your head for days. Oh and it’s hard to shake it off too.

Apart from that, there’s really not much else to remember them by. Their debut album had millions of copies sold but the next records weren’t so remarkable.

“[Their] popularity is based on universal rock & roll virtues. The Doctors aren’t trying to blaze new trails. They know we’ve been down this way with the Stones, Curtis Mayfield, and a few of their other touchstones. But the proof—plenty of it—is in the party.” – The Rolling Stone magazine

The last we’ve heard of them was about five years ago when they released their sixth album. It didn’t sell well like the others so they probably got the message.

The ‘90s was an interesting time in music. Sadly for all rock fans, it also gave birth to the rap-rock group Limp Bizkit – one of the worst bands in existence. We don’t exactly hate them but we’re also not big of ‘rockers’ who sing about “chocolate starfish and the hotdog-flavored water.”

Somehow, fans were deceived into thinking Limp Bizkit could compete with other legendary bands. Uh, no – they don’t even belong in the same sentence to be honest.

“I don’t even listen to any type of music that’s like Limp Bizkit at all. I love jazz music and sad music. I’m a sentimental guy. I’m a romantic guy.” – Fred Durst

Also, lead vocalist and rapper Fred Durst is perpetually angry in his vocal delivery. We don’t understand the angst – is it part of the package? Either way, last time we heard about them was in 2016 with their concerts in UK. Let’s hope that’s it.

Here’s the thing: when you saturate people with your music, they will not only get sick with the songs but with the band too. Everyone just had enough of them. Kid Rock was embarrassed when we found out he was hanging out with the frontman Scott Stapp and the group was even sued by the fans for a sloppy show back in 2003. Now if that doesn’t scream hate, we don’t know what does.

“Sometimes I cringe when I see it. Like, ‘What was I thinking? Look at those pants.’” – Scott Stapp reacting to his look in Creed’s “Higher” video

This is what commercial sellout sounds like. And because they sold millions of records at the height of their career, they thought they can replicate the success by going on a reunion tour in 2009. But obviously, nobody wants to waste their time anymore. They had their moment, no one needs their comeback.

Once upon a time, MTV played so many Good Charlotte videos that they drove us insane. It was hard not to notice them and their crappy music. Their songs are probably effective in torturing people. Their lyrics are incredibly cheesy you just feel like vomiting when you hear them.

When asked about the title of their 2009 album “Cardiology,” Joel Madden said it’s because the lyrical content were “all connected to the heart.” Oh dear lord, just stop this.

“We didn’t want to make another record just for the hell of it, or for the money or whatever. But we all felt like we had something to say.” – Joel Madden

Their latest album was released in 2016 and it’s exactly what you’d expect from the band – except, they’re no longer the rebellious teenagers because obviously, they’re now middle-age men. We’re kinda sure that we’re not the only ones who aren’t looking forward to them touring again.

For the record, My Chemical Romance is not that bad. They’re certainly way better than the other bands mentioned earlier. But you know, we’re past the ‘emo era’ and the group is heavily associated with that image – eyeliner-wearing, side-swept hair, angst-ridden. Emo teens are tolerable, emo middle-age guys well, not so much.

In 2013, My Chemical Romance went their separate ways.

“Being in this band for the past 12 years has been a true blessing. We’ve gotten to go places we never knew we would. We’ve been able to see and experience things we never imagined possible. We’ve shared the stage with people we admire, people we look up to, and best of all, our friends. And now, like all great things, it has come time for it to end. Thanks for all of your support, and for being part of the adventure.” – My Chemical Romance’s official statement

We know some fans are waiting for a comeback or some sort of reunion tour. But let’s remember them as the badass youth instead of these 40-ish guys singing about love lost. It’s just not the same.

They were a big hair metal band in the ‘80s with millions of records sold. They enjoyed massive success but we’ll be honest, they’re forgettable. We liked some of their hits but let’s leave everything in that decade – who wants a bunch of guys in their late 40s singing about the “sweet cherry pie” that “tastes so good make a grown man cry.”

Yup, that’s going to look weird. Plus, with the death of Jani Lane, it won’t ever be the same even if they found someone to fill his shoes. You can understand what we mean if you listen to the album they released on May 2017.

“You can hear and feel the emotions of the last 25 + years of being in this band poured into LHF. The fun and the frustrations, the pleasure and the pain… a whole lot of blood, sweat, tears and beers went into the making of this album. Love it or hate it, its the real deal, 100% pure melodic hard rock. Hand crafted by five musicians who dedicated their lives to music when they were just little kids with big dreams.” – Erik Turner

If they ever hit the road again, we’ll pass. Also, here’s to hoping they realize they should just retire.

Who wants to see the band that made the worst song of all time stage a comeback? No one? Yes, we thought so too. Well maybe we’ll consider if Grace Slick signs up but we highly doubt that because like us, she’s not exactly a huge fan of old rockers still making albums or going on tours. She famously said, “All rock-and-rollers over the age of 50 look stupid and should retire.”

That’s Grace Slick for you, dropping truth bombs fearlessly. Anyway, Starship’s last performance was on September 8, 2014 at the Streamy Awards but they did release the single “My Woman” last 2016.

“My friend Martin Paige brought me a demo of the song that he had written with [Elton John songwriter] Bernie Taupin. I thought it had a nice nostalgic feel to it. I wanted to do the song, but I never thought it was a single.” – Mickey Thomas on “We Built This City”

No one’s heard of them since and we’re fine with that.

They had cheesy songs with sappy titles and lyrics. Most of all, they were commercial sellouts. But you can say all what you want about them and they’d be laughing all the way to the bank. Besides, let’s give credit where it’s due – it’s not easy coming up with classics like “Livin’ on a Prayer,” “You Give Love A Bad Name” and “Wanted Dead or Alive.”

But we’re not questioning their awesomeness, we’re laying down the truth – few would want Jon Bon Jovi to reunite with Richie Sambora. But it’s somehow expected during the band’s upcoming induction into the Rock and Roll Hall of Fame.

“I would imagine so. Nobody has called me yet or anything like that, but I would imagine that would be the protocol. Don’t you? I would think so. Of course, I’d be obliged.” – Richie Sambora on reunion talks

That would probably be okay but if we’re talking comeback like new albums and tours, we’d rather watch another Jon Bon Jovi movie.

Oasis is proof that there’s no such thing as happy endings. In their glory days, Noel and Liam Gallagher’s band was dubbed as “The Next Beatles.” But they brought their family drama to the public and it’s just too much even for loyal fans.

From backstage fights to talking crap about each other, it gets old – but last December Liam said that Noel reached out to him and they were “all good again.” So is it possible for Oasis to stage a comeback? We hope not.

“Any reunion would be great for my bank account, but it would be a year of my life—at least—where everything else would be on hold. And it would be miserable.” – Noel Gallagher

Of all the things Noel has said, this is perhaps the only one we agree with. Besides, there’s been too much bad blood we’d prefer not to hear any more of the drama.