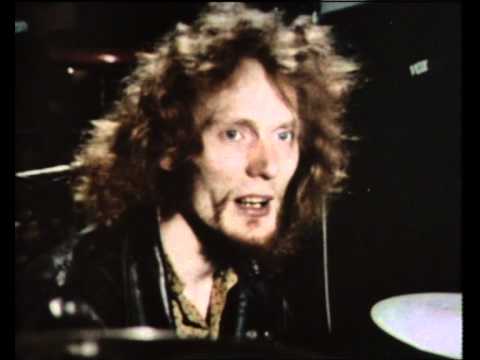 Baker began to make himself known in the London music scene of the sixties in clubs, playing with jazz groups, however, his drumming style did not fit with the subtlety of jazz, so he began to experiment in blues and rock, which led him to meet Jack Bruce and Eric Clapton, with whom, in 1966, formed the band, “Cream”

During his long career he was also part of groups such as “Blind Faith”, also with Eric Clapton, “Hawkwind”, he collaborated with the Nigerian musician Fela Kuti, among others.

Despite the fact that his career was quite controversial due to his difficult character, which often led him to fight live with his teammates, his talent on drums was always indisputable and here we leave you 10 songs that prove it.

Toad, was the final song on Cream’s debut, a performance that set a new benchmark for rock drum solos.

Baker’s undeniable drumming skills and “Toad’s” distinctive style would inspire other generations of drummers, but for Jack Bruce Baker’s extended solos served a more practical function. Once the bassist assured that he liked them “because I could go and smoke”.

Cream – Sunshine of Your Love

Cream’s signature song, it has often been noted as a precursor to heavy metal. But Baker’s drumming on “Sunshine of Your Love” doesn’t exactly exemplify the characteristics that would define the next phase of loud, aggressive rock.

Instead of adding a hard-hitting backbeat to Bruce’s iconic riff, Baker opted for a minimal, laid-back beat, a complete innovation for the time.

After Cream and Blind Faith, Baker began working in his own band, Air Force, a 10-piece ensemble with which he experimented with his interest in jazz and African rhythms.

With “Aiko Biaye” Baker demonstrates his talents in a brilliant piece of avant-garde music, co-written by one of the band’s other drummers Remi Kabaka.

Baker and Clapton brought their innovative and exploratory spirit to their next band, Blind Faith. On “Do What You Like,” the drummer demonstrated his talent and how comfortable he was letting the moment guide him with a wonderful drum solo towards the end of the song.

After his career with the Air Force, Baker joined brothers Adrian and Paul Gurvitz formerly of the hard rock group, “The Gun,” with whom he formed “Baker Gurvitz Army,” which had an intense and dramatic sound.

“Love Is” epitomizes the group’s distinctive mix and showcases all of Baker’s talent and intensity and talent on the drums.

Blind Faith – Had to Cry Today

A triumph of episodic construction, “Had to Cry Today” comes across as something akin to progressive blues. There’s an inherent push and pull here, and abrupt changes of mood and emotional temperature, all buoyed by virtuoso performances from Eric Clapton and Steve Winwood, then at the top of their games. Put those sticks in the hands of a minor drummer, and he could have been very humiliated. Not Ginger Baker.

If Ginger Baker’s presence on “Strange Brew” was all about delicate control, Cream’s hard-hitting version of Willie Dixon’s blues classic “Spoonful” gave her a chance to show some raw power. But even here it displays an exciting complexity, from the crash of cymbals on the side to a series of perfectly calibrated fills. Along the way, they gave “Spoonful,” which had been memorably recorded by Howlin’ Wolf as a single-chord modal blues, a forceful push into a new era.

A Top 20 hit in Cream’s native UK, “Strange Brew” is (on the surface at least) much more notable for its use of Eric Clapton on vocals (rather than Jack Bruce, who sang most of the songs). from the band). In fact, the track, which began as a dash through the early blues and jazz standard “Hey Lawdy Mama,” begins with a fairly standard boogaloo beat. But listen to what Ginger Baker does once Clapton gets to his solo, adding cool variations and booming runs, all without losing that unerring sense of swing.

Ginger Baker takes Cream from an eerie 5/4 intro to the main 4/4 beat of the song, and from there, Pete Brown’s freakout lyrics and Eric Clapton’s wah-wah tend to take center stage. Holding all that heavy spectacle together is Baker’s ability to guide the song through its many musical complexities; it matches both Jack Bruce’s threat and his fantasy. That helped propel “White Room” beyond its psychedelic roots toward the status of a rock classic.

When Hawkwind lost Robert Calvert, their original singer and lyricist, they inevitably moved towards more instrumental music in the studio, and who better for that than Ginger Baker? Check out the fleet “Space Chase,” which illustrates the drummer’s deep interest in tribal tom-centric rhythms, something that dominated his jazz albums. Although the partnership here began with great promise, ‘Levitation’ would be the restless Baker’s only studio album with Hawkwind.