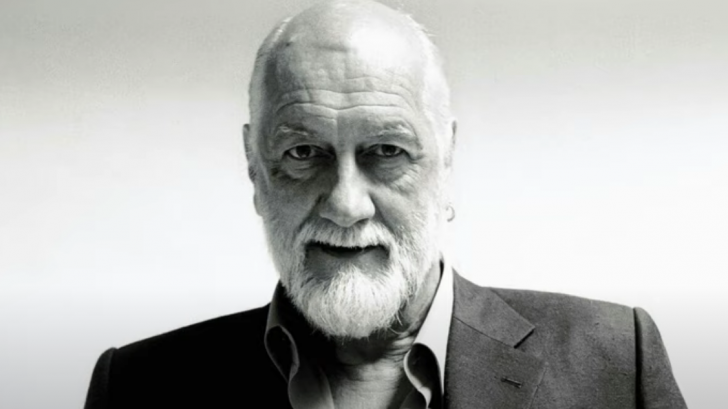 Although Fleetwood was frequently the architect of his own downfall, there were a few occasions when he had an incredible number of misfortune. The two words that end up making up the title of Fleetwood’s 2014 autobiography, “Play On,” grasp his perseverance and, possibly, what makes him most remarkable: this was Fleetwood’s credo all through the personal and career chaos, resulting him to conquer the difficult moments and force the group towards heights. Here is Mick Fleetwood’s sad (and magnificent) life story.

HE HAD A DIFFICULT CHILDHOOD AND FREQUENTLY FELT ALIENATED.

AS A CHILD, MICK FLEETWOOD HAD A CLOSE CALL WITH DEATH.

As Mick Fleetwood describes in his autobiography, “Play On,” he was residing in Egypt at the time he nearly drowned. “I’m not sure how or why I got into water too deep for my abilities, but I was pulled out by a man in a flowing blue cloak and when I looked up at him I thought he was a magician.”

HIS DYSLEXIA WAS SERIOUS

The drummer for Fleetwood Mac recalls switching schools frequently because he was not a particularly top student, but not the disruptive sort. Although Mick Fleetwood had severe dyslexia, schools did not identify the symptoms in the 1950s: “Back then, particularly in the UK, learning disabilities weren’t understood or even accepted, so students like me were simply left behind. My parents only knew I had problems at school,” he writes in “Play On.”

As per a 2001 Fleetwood Mac documentary, Mick Fleetwood and his sisters were sent to boarding school after his family moved back to England when he was about 8 years old. This implied that although the Fleetwood folks proceeded to travel the globe, the Fleetwood kids would enroll in a secure school system and become prepared for college. But Fleetwood’s biggest dread came true when he started boarding school. In addition to dyslexia severely impairing his school performance, he also experienced “Blackboard Syndrome,” as Fleetwood puts it in “Play On” “a lethal combination of performance anxiety and my dyslexia.”

According to Ultimate Classic Rock, Fleetwood began a relationship with Jenny Boyd, a model as well as the sister of Pattie Boyd, who was then married to George Harrison but later wed Eric Clapton. Fleetwood married Jenny Boyd in 1970 after many years of reticent courtship (as they both recall in the 2001 Fleetwood Mac documentary), and the two became parents of two children. However, the family had little privacy at that time because Fleetwood Mac was at the height of their popularity. They all occupied Kiln House, a sizable villa, with the rest of the group and staff. According to Jenny (via The Guardian), “I wanted to start a family, not a commune.”

Additionally, he would be either touring or preoccupied with recording for months at a time, rarely speaking to her. Jenny ultimately became involved with Bob Weston, the group’s guitarist. She said he would be the only one at Kiln House who spoke to her. 1973 tour was planned before Fleetwood learned, but once the tour concluded, Weston was dismissed, and Fleetwood and Jenny separated shortly after.

Since the very beginning, Fleetwood Mac has had turmoil, and a major portion of it was due to Mick Fleetwood and John McVie replacing a number of guitarists and lead vocalists. Peter Green, the group’s co – founder, was the catalyst for everything in 1970. Green began consuming LSD less than a year after founding Fleetwood Mac. In contrast to other substances, acid seldom has such a severe disastrous impact on the mental health, but it can cause schizophrenia-like hallucinations in big doses, and long-term usage can make the disease worse (through Black Bear Rehab), as it did with Peter Green.

In early 1970, according to Louder, Green went on a three-day LSD trip and came out persuaded that money was the demon and Fleetwood Mac’s popularity was a terrible portent. When they objected, he gave the group the command to donate every last penny to the effort to alleviate world hunger. As per Rolling Stone, what came next was an apparently Sisyphean process of hiring guitarists who would depart. Jeremy Spencer vanished in 1971. Then Bob Weston was forced to depart because of his involvement with Jenny Boyd. Bob Welch and Dave Walker eventually departed. When Fleetwood went talent-hunting in the US, he returned feeling quite dejected, but it was also at same time that he discovered Lindsey Buckingham and Stevie Nicks.

Fleetwood Mac had finally achieved a steady lineup by 1976.   They created the self-titled No. 1 album that year, then in 1977, they published “Rumours,” which spent 31 weeks at the peak of the Billboard charts and earned a Grammy. However, “Rumours” was simply the bright spot amid the group’s terrible internal conflict, according to Rolling Stone.

Stevie Nicks and Lindsey Buckingham had split up, while Christine and John McVie were dealing a contentious divorce (as Christine was having affairs with band technicians, as per Far Out Magazine). In 1976, Mick Fleetwood remarried Jenny Boyd (according to the Daily Mail), but their previous issues reappeared. Additionally, Fleetwood began a relationship with Nicks. Both Buckingham and Nicks wrote songs about their split, which they were forced to play despite frequently loathing it. According to Nicks, the words of “Go Your Own Way” really offended her. “Every time those words would come out onstage, I wanted to go over and kill him. He knew it, so he really pushed my buttons through that.” Fleetwood was now in the thick of it all.

HIS RELATIONSHIP WITH STEVE NICKS

Mick Fleetwood and Stevie Nicks discovered they were more than just pals during their 1977 “Rumours” tour (allegedly, their affections were sparked during Annie Leibovitz’s Rolling Stone cover shoot). However, Jenny Boyd and Fleetwood had recently reunited, and they were now married. Additionally, Nicks was dating Don Henley of The Eagles (via Cheatsheet).

As you could have suspected, their relationship did not end well. It was chaotic, juvenile, and drug-fueled. In fact, Nicks claimed to Oprah that if they hadn’t been “completely drunk, messed up, and coked out,” the affair may not have taken place in anyway. She continued to explain why the relationship was bad: “It was a doomed thing, caused a lot of pain for everybody, led to nothing.”

USAGE OF DRUG WAS COMMON

Fleetwood Mac had 14 limos available at all times by the middle of the 1970s, and Stevie Nicks’ hotel rooms were required to be pink and include a white piano (via New York Post). Insert coke, the narcotic that was associated with VIP parties in the 1970s and that the group believed it is necessary to use in handling their growing demanding schedule. According to the New York Post, Mick Fleetwood was crowned “The King of Toot” in the backstage area after snorting between “seven miles” and $60 million amount of cocaine.

THE DAUGHTERS OF MIKE FLEETWOOD WERE PROOF OF EVERYTHING.

According to a 2001 Fleetwood Mac documentary, little Amy and Lucy Fleetwood saw their father at his worst. Lucy recalls that she and her sister were worried about their father nonstop. He would pass out from drug abuse, but the girls believed he was severely ill as they saw him slumber till late afternoons and remain immobile. Amy also claims that because their dad would neglect them for days on end, she was never able to get the closure she needed as a child: “I felt a little like, ‘Here I am, I’m right here.'” As Stevie Nicks adds, “We all watched Amy and Lucy grow up without any of us hardly … you could call in sick to anybody but Fleetwood Mac.”

DUE TO CANCER, HE LOST TWO FAMILY MEMBERS

According to a 2001 Fleetwood Mac documentary, Mick Fleetwood’s father passed away from cancer in 1978. Fleetwood had been constantly working to provide his parents with comfortable retirement, but he had not anticipated his father’s sudden demise. His autobiography states that he had wanted to construct a home for them on some property in Provence, close to where his parents had travelled each summer, so that they might spend the remainder of their lives in a location they cherished. Mick regrettably missed his father’s passing since he was on tour in the United States at the time.

When Mick Fleetwood’s sister Susan Fleetwood passed away from breast cancer in 1995, grief hit once more. After receiving therapy, she never gave up her acting profession despite receiving a diagnosis a decade prior, according to Variety.

HIS LIFE WAS CHANGED AFTER MEETING HIS THIRD WIFE (BUT THEY, TOO, SEPERATED)

According to the 2001 Fleetwood Mac documentary, Mick Fleetwood first met Lynn Frankel Fleetwood in 1989. However, the couple would not be married until Lynn determined that Mick was healthy enough to spend the rest of his life with her. In fact, Mick’s decision to stop abusing alcohol and other substances was inspired by Lynn. On a visit to Maui when he and Lynn were meant to spend time becoming clean together, Mick recalls one especially significant day when he was barely sober after a party and his wife declared she was returning home. Mick looked in the mirror and was horrified to see a “sweaty, greasy blancmange”; he went to bed, woke up, and made the decision to quit drinking.

Lynn is praised by Mick and his daughter Amy Fleetwod for being the change’s impetus. According to Star (via This is Surrey Today), Mick and Lynn Fleetwood later had twin girls, and life was blissful for a while. However, the pair announced their separation in 2013 (via Ultimate Classic Rock), claiming their inability to come to an agreement.