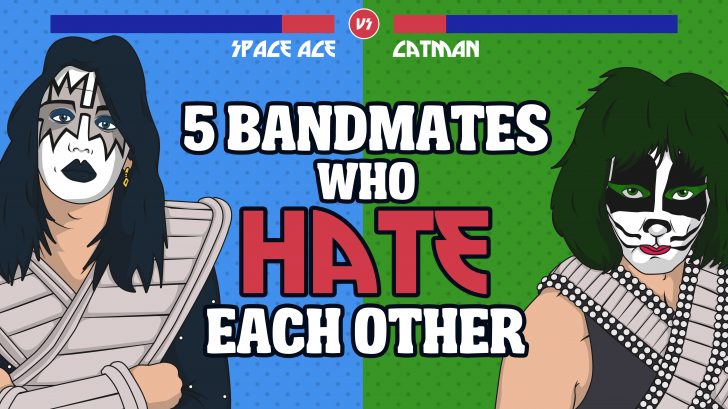 Not Everything Is As It Seems

Just like every normal people, bandmates have their own personal vendetta with each other. Although we can see them rocking it out on stage, behind the scenes there’s always feuds. Some of our favorite bands doesn’t get along and have their own squabble. But despite that, they still managed to be successful and become one of the greatest musical acts in history of rock n’ roll. Those personal differences didn’t get in the way, they still managed to offer us there musical talents. The hate for each other was just something they cannot avoid. These bands relationships is something that we never understood and yet they still rock it out for us the fans.

This was never surprising because Axl Rose did have a raging attitude. The band’s problem began during the early 90’s, no one ever had any idea why Slash hated Axl that much. Well, I guess for one reason Axl was one of the most difficult people to work with. Both were egoistic and have their own creative differences. But despite that, Axl Rose still managed to go through.

During an interview in 2009 with Spinner, Axl Rose said,

“Personally I consider Slash a cancer and better removed, avoided—and the less anyone heard of him or his supporters, the better.”

But finally, the two buried their hatchet recently and had their reunion tour.

“You don’t need to like each other to rock out.” – City Pages

There’s still hope for both of them, someday these two will understand the fundamentals of forgiveness and they will bang it out and rock it out in the Paradise City.

Who could ever forget these incredible lineups. This was the time when kiss rocked the world of rock n’ roll. But two members Ace Frehley and Peter Criss had their differences. Both left the band in the early 80’s. And after a nostalgic reunion during the late 90’s both never again wore the makeup and have stayed away with each other.

During the CBS interview with Gene Simmons and Paul Stanley,

“Frehley and Criss no longer deserve to wear the paint. The makeup is earned. Just being there at the beginning is not enough… And if you blow it for yourself, it’s your fault. You can’t blame your band members. ‘Oh, look what happened to me. Oh, poor me.’ Look at my little violin. I have no sympathy.” –Gene Simmons

“They don’t deserve to be in the band” –Paul Stanley

Paul Stanley also claimed that the two were both anti-Semitic. (Paul And Gene were both Jewish). He also claimed that Frehley collected kinds of stuff that are connected with Nazis and Criss hated Asians, calling him racist. Stanley never wanted to perform with them anymore even during their Rock N’ Roll Hall Of Fame induction in 2014.

The quarrel and differences of these two never stop them to become one of the most influential rock bands of the 70’s and 80’s. After their album The Wall 1979, everyone grew tired of Roger Waters attitude. The feud always starts with different personality type. It’s unavoidable.

“He forced his way to become that central figure,” -David Gilmour

Waters self-centered attitude turn the band into a clash. He was mentally unstable and had a pretty massive ego. It was there, though being subtle about it. Although the fact that Roger Waters was the brain of Pink Floyd, Gilmour weren’t acceptive of that. They never came to any conclusion that both were responsible for their success. Gilmour was the musical genius and Waters was the lyrical mastermind. We could all agree that despite the nature of their differences they were better together than apart.

The rock gods of their generations have been together on stage for more than 5 decades now, who could have ever imagined that these two had their feuds. Though the good thing is they managed to get back on good terms and finally surpassed their differences.

Their feuds nearly broke up The Rolling Stones. The drug addiction of Keith Richards was the very reason why the band almost split. Though the band is still rocking it out all over the world, the two weren’t much of a friend, they are more likely business partners.

“I think the relationship is actually still in flux, or still growing — it isn’t fixed. Sometimes he can get up my end, and I have no doubt that I can certainly piss him off sometimes. At the same time, there’s a chemistry between us that we both recognize and that we know works. In a way, we’re both trying to come to terms with each other. Most guys, you know where you stand with. Mick and I don’t quite know how we stand with each other, and we never have.” -Keith Richards

Seems every feud between bandmates were always about ego. David Lee Roth never wanted to be a friend of Eddie, he certainly had his own perspective on how the way he sees himself. He always thought that he was the “Van Halen” Even in his autobiography, he suggested that he never finds it easy to get along with anybody.

“He does not want to be my friend. How can I put this: Roth’s perception of himself is different than who he is in reality. We’re not in our 20s anymore. We’re in our 60s. Act like you’re 60. I stopped coloring my hair, because I know I’m not going to be young again.” He also implies that Van Halen might not record another album because “one of us likes dance music.” That “one of us” is presumably Dave, and suddenly I am very curious to hear what would happen if he made a record with, like, Kaskade.” –Eddie Van Halen

Seems like we have idolized a person whom since his youth seem to live in a state of stunted ego development. Money and fame never helped Roth to battle his egoistic problems, it just makes it even worse.

Though they managed to saddle everything behind their backs and reunited with each other and made an album called ‘A Different Kind Of Truth’ (2012). The album turned out to be very good.