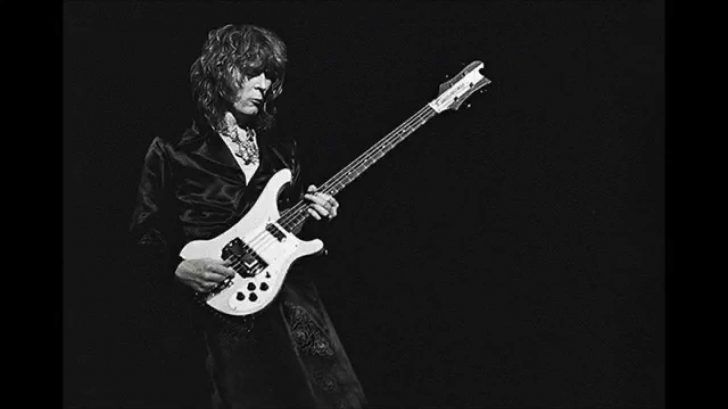 Over the years, Chris Squire’s style gracefully evolved from symphonic progressive to accessible New Wave and pop-rock and vice versa and has provided fans the greatest basslines in the history of music. The bassist and singer co-founded Yes in 1968 with Jon Anderson and until his death five decades later (27 June 2015), he was the only original member left. It’s strange, then, that Squire has always been the most underrated figure in the legendary progressive rock band. Below are the 5 Greatest Basslines From Yes:

That bass riff. That wicked bass riff. Squire’s bluesy frog jump pattern on “Roundabout” is the heart and soul of the song, and arguably the most iconic work he has ever completed on that instrument. You must have known the riff was special from the start – to achieve maximum oomph, Chris Squire duplicated the pattern with an electric guitar.

Yes released two albums before 1971’s “The Yes Album,” but the band’s streak of true greatness begins here. Engineer-producer Eddy Offord helped bring clarity and punch to the vocals and instruments, best evidenced by the growling tone of Chris Squire’s Rickenbacker bass. The spiritual mini-epic “Starship Trooper” is Yes’s first true masterpiece, and the bassist’s high-pitched, tremolo riffs anchor the track from start to finish. (Bonus points for Squire’s booming harmonies on the acoustic bridge, underscoring how important it was to the band’s vocal focus.)

The Gates of Delirium

“The Gates of Delirium,” the centerpiece of the 1974 fusion-tinged “Relayer,” is nearly packed with classic bass riffs. The band had 22 minutes to stretch, but this one-sided epic rarely pauses to catch its breath, going from psychedelic to full-blown jazz-rock bombast and the final serenity of “Soon.” The entire band (including interim keyboardist Patrick Moraz) is in top form, but Squire’s bass is the scene-stealer – check out the funky (apparently PFM-inspired) 8/11 beat that starts at the 10-minute mark and 20 seconds.

Close to the Edge

“Close to the Edge” is the pinnacle of Yes’ discography, the point where the band’s classic lineup reached its full progressive potential. The 18-minute main track would be part of any Yes member’s individual roster. From Rick Wakeman’s thunderous church organ to Bill Bruford’s knobby drum fillings, this is the work of a group that shoots full blast. Squire brings some of his most distinctive bass riffs to the track, from rising opening lines to an octave jump beat. But his most crucial contribution comes during the space section “I Get Up, I Get Down,” when he and Howe add counterpoint choruses under Anderson’s triumphant lead.

Heart of the Sunrise

The complete package of imagination, virtuosity and melody has it “Heart of the Sunrise.” Chris Squire’s performance is transcendent throughout – anchoring the aggressive, chromatic lead riff, harmonizing and playing against Howe’s guitar in surprising ways. And he never played with more authority than during the slow build section that begins around the 30-second mark. Perfection.