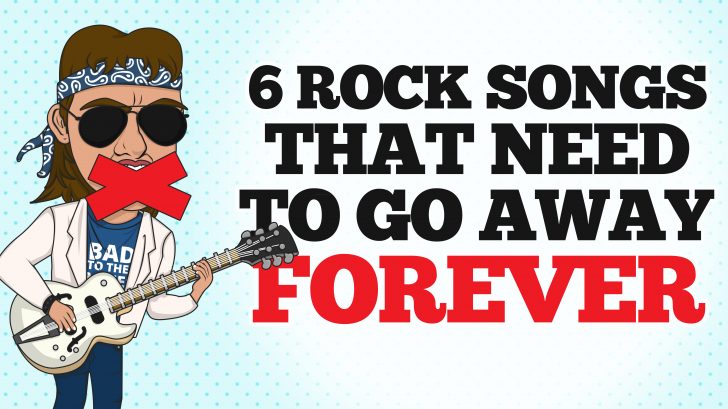 The songs on this list have given us the fulfillment to enjoy music. The songs listed here are definitely great, but why do they have to go? Something has to go away forever, whether that something is what you love or that something is what you hate. Everything has its end and we have to let them go to make way for better things. As we are all fed up with the same stuffs over and over again, ignoring the fact that there are far better rock songs out there that need its recognition for the public to hear. You might agree on this one, one way or another, as we give you the 6 Rock Songs That Need To Go Away Forever

1. Carry On My Wayward Son – Kansas

Carry on, there’ll be peace when you are gone….. Forever…

A single recorded by Kansas for their 1976 album “Left overture” and was used by a TV Show called “Supernatural” and several movies. Most would agree that “old is gold” and it would be hypocritical if we did not enjoy listening to this song. But at some point in time this song has to go away forever to make way for other great classic rock music.

Something has to go, right? Wouldn’t you agree?

2. More Than A Feeling – Boston

A song written by Tom Scholz and first released by the classic rock band “Boston” for their self-titled debut album. It’s more than a feeling that this song has to go away forever, countless of movies and TV shows have used this as a soundtrack and it never ends…

It has to stop somewhere, this “feeling” doesn’t have to last forever. There are far better classic rock tracks out there that needs recognition to the ears of the public.

Well, here it goes. We all recognize this one, and we all have jammed to this song. One of the most recognizable and best song of Lynyrd Skynyrd and you can’t just simply dislike it. There’s no place like home and it makes you feel that way.

But the song has to go, why? Aren’t you all fed up hearing something being used as a soundtrack all over and over again, – it even has a self-titled movie.

4. Bad To The Bone – George Thorogood

Its Judgement Day everyone! We have to Terminate this on our song list.

“Bad to the bone” is a song by George Thorogood and The Destroyers and was released in 1982. Recognize this song? Most of us have watched Terminator 2: Judgement Day and might have brought us to this song. You can’t even hear this song without seeing Arnold Schwarzenegger face and it keep saying “I’ll be back”…

What makes this song popular? I don’t know, maybe because the song was used for different films and shows and was covered by the ZZ Top that’s why it became soo popular…

5. Pour Some Sugar On Me – Def Leppard

Are you a Family Guy?

If so, you should thank your parents for raising you up with this type of good music.

What make this song so special is that we can still rock hard and bang our heads to it up to this day. A song by the English rock band Def Leppard from their 1987 album Hysteria and was widely used as a soundtrack. We might even think that Tom Cruise did a great cover of this song in the movie called “Rock of Ages”.

Pouring maple syrup on our body has to stop immediately and give other rock songs a chance.

Take it easy everyone!

We all just happen to have liked listening to this not because of some movie. It’s really a good song and it’s a great thing that this song makes you realize what real music is… A song by the British rock band Foghat and was released for their fifth studio album, Fool for the City.

It’s sad to hear that this song has to go away forever, and you know I’m right. We have to let some legendary rock songs have its ride.