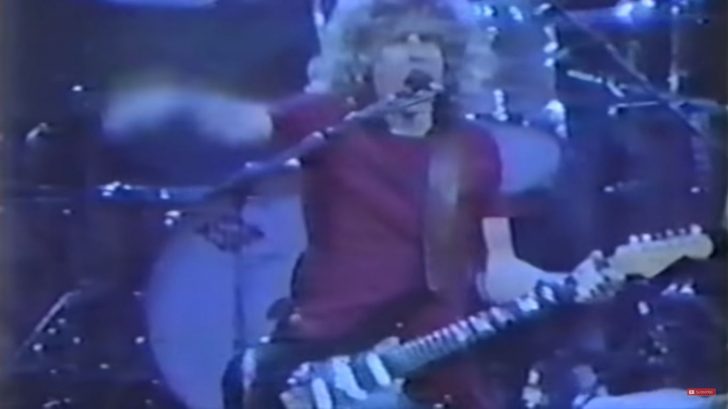 Someone uploaded and shared some decent quality clip from Sammy Hagar’s first decade as a solo act.

We’ve never talked much about Sammy or feature any kind of stuff from him, not even his solo career, but this one is an exemption because it’s one of his unique stuff and he’s surely at his best. We never saw any kind of footage nor pro shot from his solo career, that’s why we’ve never searched for it. This may be a bit new to us because of its uniqueness – though it has been on Youtube for years, no one seems to have the interest to see it until now.

The footage was from Sammy’s February 3, 1919, at The Summit in Houston, Texas. He was opening for the known band at that time – the “Boston.” Boston was on tour during those times in support for their second album, and Hagar was also doing the shows in support for his solo album called “Street Machine.” Sammy was playing with Gary Pihl on guitar, Bill Church on bass, Chuck Ruff on Drums, and Alan Fitzgerald on keyboards.

No one expected that the man ABOVE that in just seven years later after his solo career he would join Van Halen and would tour with them as their new singer. Who knew, right?

Surely enough and guaranteed that you will enjoy the video below, and the main thing it presents that maybe, someday we’ll see similar stuff from the guys from Van Halen, so-called never-seen footage from the same era.

See Sammy Hagar perform an incredible set while opening for Boston. It’s surely enjoyable to see one of its kind footage – Sammy Hagar’s and his incredible start in the music industry.

Keep going for the video below and watch the rarely seen footage from early on in his career.