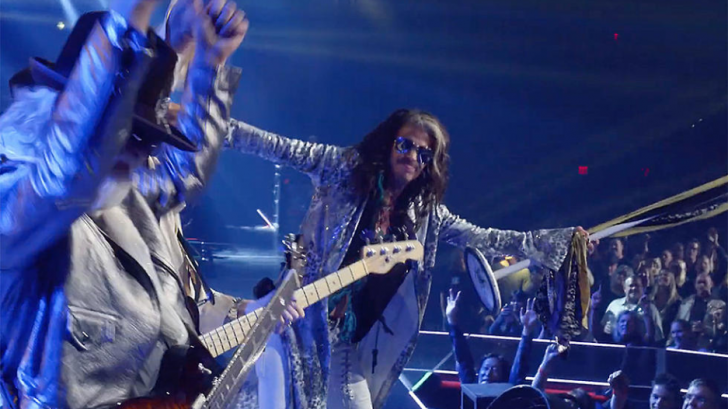 In the video below, Steven Tyler can be seen showcasing the adventurous and indulgent nature of the city with his bandmates onstage while chanting the city slogan with the crowd, “What happens here only happens here.”

Aerosmith’s current Deuces Are Wild residency at the Park MGM’s Park Theater will kick off in April 2019 until June 4. Soon after the run started, guitarist Joe Perry admitted that he was doubtful with the concept.

“I thought I was going to be bored doing this by now, the way everybody was talking about it,” he said. “You know, ‘You don’t have to travel every day. It’s all automated, the lights, moving stuff.’ Well, the bottom line is, when we go out there, it’s a new audience, and it’s like a whole different show. … You have to go out there and win them over. If you have a night where everything was great, you still gotta do another great one tomorrow. You gotta try. You’re always starting from zero every time you walk out there. So, that part is exciting. Frankly, I haven’t been bored yet.”

The show features material from the band’s old catalog, including hits and additional musicians to provide new arrangements. “You’re immersed in Aerosmith’s world when you come to this show, and that’s the difference,” Perry said. “It was important to us to maintain the hardcore, garage-band feel of what Aerosmith is and try to bring in the big-show element of a Las Vegas show.”

He then described the short movie that opens the show as “most important.” “When we showed that film the first couple times, people were actually crying in the audience,” he said. “They were saying, ‘I remember them when they played there!’ or ‘I remember when I first heard that song!’ or whatever.”