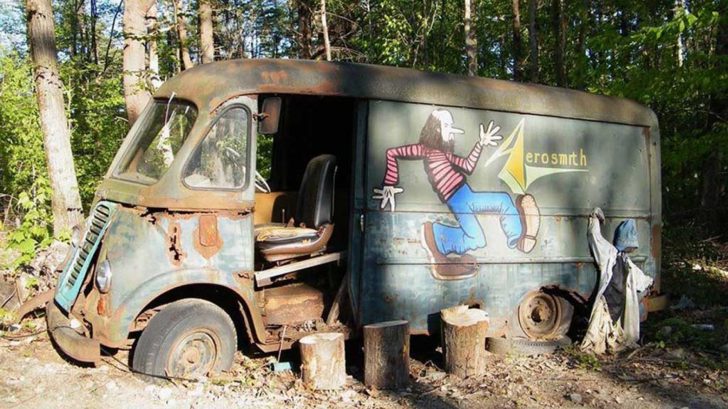 Aerosmith legendary first VAN was recovered by Mike Wolfe and Frank Fritz, the host of The History Channe program American Pickers. The Van is a 1964 International Harvester Metro and was abandoned in the woods near Chesterfield in Hampshire County Mass where it’s found — pretty much far away from the band’s hometown of Boston.

Aerosmith guitarist Joe Perry and original guitarist Ray Tabano confirmed that the van was absolutely theirs. Ray Tabano was a former member of the group between 1970 and 1972 and was replaced later on by Brad Whitford.

“I’m afraid to say how long it is, but it’s been like 40 years since we’ve been in this thing,” Tabano told Wolfe and Fritz. “We’d drive from Boston up to New Hampshire for $125. Then after the gas, the tolls, and the food and back, we’d all make like $3 apiece. It just reminded me of the humble beginnings and I look at where [the band has] gone today it’s just amazing,”

Wolfe even called the first ever van owned by rock legends Aerosmith  “a piece of American rock and roll history,” the History Channel program hosts bought the band for $25,000 from the owner of the property on which it was found.