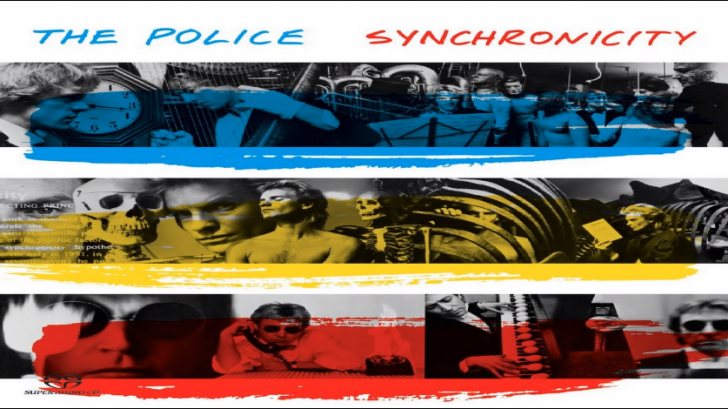 The Police are one of the bands of which no studio album from 1978 to 1983 has disappointed us, although we were a little puzzled to hear Ghost in the Machine by the addition of trumpets and songs more pop than in their previous albums, be amazed by the power of Outlandos d`Amour, or the wonderful and somewhat more rhythmic Reggata de Blanc, the undervalued for some Zenyattà Mondatta. But more impressed by the latest album than the trio, made up of bassist and composer Sting, guitarist Andy Summers and their great drummer (one of the best) Stewart Copeland, released before their final separation, the great Synchronicity.

Pleasant pop-rock, even if a bit asexual and irritatingly polite. In addition to the fact that some of the compositions are really cool, we also have here the sound support of the new wave. Accentuated bass, sharply marked rhythm, relaxing voice of Sting, enriching synthesizer sounds around each song, strumming guitars, nice and catchy melodies – a successful combination. Three songs are really good and if the album kept their poses for nine pieces, The Police would be a band worthy of more serious memorization.

Synchronicity sounds like a simplified, empowered King Crimson of the 80s – a moderately interesting but very nice new wave with a distinct electronic sound, engaging, energetic drum and bassline and vocals are neatly interwoven with each other. Perhaps the best piece, engaging rhythmically and melodically “rock synthpop”, makes you dance with an attractive bass, is nicely relaxed, unpretentious, and nicely arranged. Wrapped Around Your Finger, much nicer and romantic than the sugary of Every Breath You Take, even has something nocturnally atmospheric.

The trio that had internal conflicts separated after finishing the promotional tour of the album, Sting made a solo career full of ups and downs, while Andy and Copeland followed the same trend and also collaborated on albums by other artists. In 2007 they made a reunion tour. The Police are one of the best bands on in the history, no doubt, but apart they made a lot of snots that were not worth it, but their records as a trio have been perhaps valuable creations that will last for eternity, or only until when our world ends to exist.

Overall, the songs not written by Sting are horrible: a silly concession on the part of the handsome man to the other two members of the group, which makes the album somewhat unbalanced, the rest of the material written by the other two are remarkable and incredibly boring and monotonous.