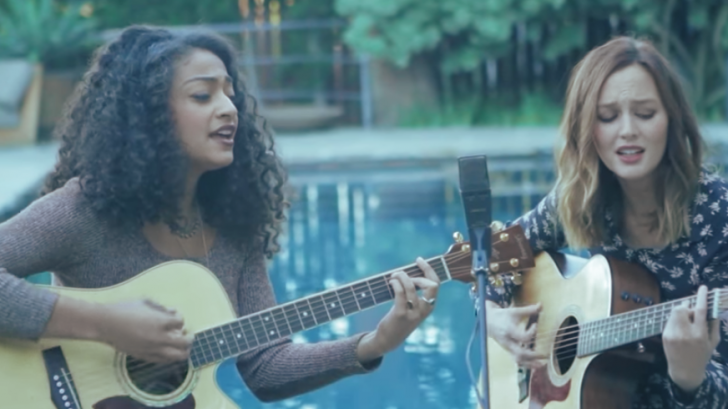 Play The Way You Feel It

It is not as easy as it seems to play a duet. Usually, one person is trying to out-sing the other or the dynamic between two musicians can be visibly tense. Dana Williams and Leighton Meester have a natural connection where there is no competition- just some sweet ethereal sounding music.

Dana Williams is daughter of David Williams, who is best known for producing works for Michael Jackson. Dana has captured that performer’s magic. She placed fourth on the talent competition, Rising Star. Leighton Meester is best known for her role as “Blaire” on the television show Gossip Girl. She is now working steadily and stellarly on a music career.

But Listen Carefully To The Sound

Originally the duo planned to get together and work on some Valentine’s Day music. Well they did… but not as planned. They had worked on Elvis and Everly Brothers covers and had brainstormed some more romantic tunes. Yet, a breakup song is ultimately what they decided on for the lover’s holiday.

“We were throwing around song ideas that could possibly be released as a Valentine’s Day cover. But then one night she sent me this song, and despite the fact that it was a breakup song, the opposite of what we had intended, it was so beautiful I thought we should just go for it!” said William’s about how their Fleetwood Mac cover came about.

The decision was a success! Leighton and Dana were joined by percussionist, Maxwell Drummey. The music maker has also helped write songs for an alt-rock band called, Chester French. The girls and Max give “Dreams” the same passion and heartache that Fleetwood Mac intended, but geared more towards a new generation. The appeal to young fans comes with their feminine harmonizations and and tranquil delivery.

Thunder only happens when it’s raining
Players only love you when they’re playing
Say women they will come and they will go
When the rain washes you clean, you’ll know, you’ll know