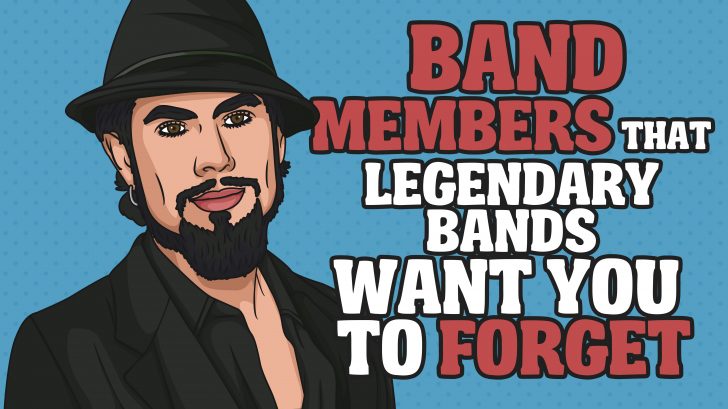 You Probably Don’t Even Know Some Of Them

You know what’s worse that getting kicked out of a band? It’s when they hate you so much they never want your name spoken in the same breath as theirs. Okay maybe that’s a bit too much. But rockstars are naturally egoistic especially if they’ve already achieved international stardom. It is what it is. Besides, how many times has ego gotten in the way of reunions or you know, patching things up?

So these guys didn’t just get booted out, some of them are even playing with the group still. But they don’t get any credit or even so much as an acknowledgment that they exist or had musical contributions.

Here’s the thing: Hugh joined Bon Jovi in 1994 as their bassist after bass guitarist Alec John Such left the band. However, he was not listed as an official member until over a decade later in 2016. Even though he played in several albums, he wasn’t actually listed in some of them. And originally, he wasn’t even included in the lineup of Bon Jovi’s entry in the Rock and Roll Hall of Fame. Good thing they came around and gave him the credit he deserved.

Even before he joined Red Hot Chili Peppers, he already managed to make a name for himself so much so that he was Axl Rose’s first choice as the replacement for Izzy Stradlin. Anyway, he was with RHCP for five years and even played in one album but he was fired in 1998 for “creative differences.” When RHCP was inducted into the Rock and Roll Hall of Fame in 2012, he was excluded from the list.

When asked about it, frontman Anthony Kiedis said: “He’s in this other band, which may in fact be inducted itself one day, called Jane’s Addiction. I think that’s the band closest to his heart, and that most represents his contribution to the world in terms of music. So maybe it makes more sense for him to be inducted one day as a member of Jane’s Addiction.” Only Chad Smith acknowledged Navarro’s contribution in his induction speech.

For all his faults, Phil Rudd will always be remembered as the guy with the invaluable contribution to AC/DC. When he was dismissed from the band because of tension with Malcolm Young which almost resulted to physical altercation, other members still had nice words to say about him including Brian Johnson who said that “You couldn’t find a more solid person or drummer than Phil Rudd.”

He was asked to join the band again but was eventually replaced by Chris Slade following murder and drug charges. Ultimately, Angus Young stated in an interview that “Phil created his own situation.”

He’s the co-founder of KISS – the man who put up the ad which was answered by both Gene Simmons and Paul Stanley. He even co-wrote “Beth” – the ballad which became their highest charting single. But in 1980, Peter was no longer part of the band. He says he left but Gene Simmons once claimed he was actually fired.

He reunited with KISS in 1995 but in 2000, left for the second time because well, he didn’t get along with them. He got so frustrated he ended up destroying his drum kit on stage. And apparently, KISS didn’t have enough respect for him that they had Eric Carr re-record the vocal track for the hit song “Beth” for their compilation album.

People call him Van Halen’s Lost Boy and for good reason. After Sammy Hagar was fired from the band and while in talks with David Lee Roth for an album compilation, Eddie Van Halen held auditions for their next lead vocalist. He was offered the highly coveted position of being the group’s third singer. No one probably saw it coming but he turned it down saying, “I go on gut feelings, and it was clear to me that something was amiss, so why continue?” But did he regret saying NO? Nope, not one bit.

BBC dubbed him as “The Unknown Stone” which is more or less true. He’s not underrated by any means but although he has played with The Rolling Stones for over two decades, few people know him mostly because he doesn’t appear in official photos of the band. Keith Richards described him as “my solid left arm” but Jones is almost always kept in the sidelines, and has not exactly been acknowledged as a full member.

He’s an exceptional bass player and their music won’t be the same without him, so why won’t they give him the recognition he so richly deserves?