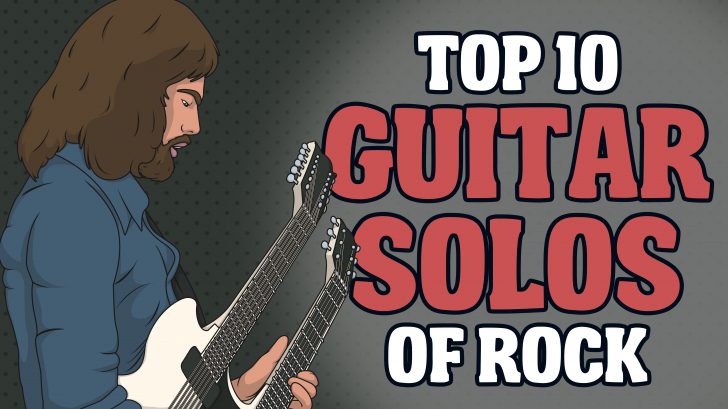 The Gods of Six Strings

Ah, guitar solos – what would we be without them? It’s that one thing we look forward to when our favorite axeslinger lets loose and just leaves us in awe of all his display of stellar guitar work and plain wizardry. A solo takes the whole song to another level. It may have lasted just a few seconds or a few minutes but one thing’s for sure – they changed the world and our lives, for that matter.

They only needed six strings to weave a spell on us. And of course, our lives were never the same way again. So we are listing down the top 10 guitar solos guaranteed to put you in a trance because they’re nothing short of magical.

Metallica in their prime were no joke. They broke into mainstream with “One,” a terrifying anti-war song about a quadriplegic soldier begging God to take his life. Kirk Hammett proved he wasn’t another average axe-wielder with his signature licks and those mind-blowing solos which only got better and heavier.

“As soon as I finished one solo, I had to do the next one. There was no time to breathe, as the whole vibe was to do it the best you could and keep moving. It was a pretty frustrating experience, to be honest.” – Kirk Hammett

So you see, one solo isn’t easy – what more if there’s three? That’s pretty taxing. And if you think it doesn’t take much to play them, just try them yourself and you’ll see it’s way harder than it actually looks.

We call it the understatement of the century when he said, “I guess I did a good enough job, though.”

This solo is everything. Everyone knows “Hotel California” and we are going to bet majority of the people who listen to it can even ‘sing’ the guitar parts. It’s The Eagles’ signature hit and it’s really no wonder why. We could listen to this all day long.

And when Joe Walsh and Don Felder started trading off solos, that’s still one of our favorite moments.

“I know, it’s so boring. It’s a song about the dark underbelly of the American Dream, and about excess in America which was something we knew about.” – Don Henley

It’s amazing from beginning to end. And the chemistry between Walsh and Felder – that only added more magic to the solo. It’s intricate, creative and simply flawless. Besides, how many songs start with a great solo and end with another one? It’s the rock duet that remains unrivaled. This makes us want to go back to those simpler times.

It’s not like we needed proof that Eric Clapton’s not from this world. But hey, if there is one, here it is. “Crossroads” only confirmed what we already knew – Clapton is a rock god. Because let’s face it, no mere mortal can pull this off.

However, while we normal human beings go ga-ga over this solo, Eric Clapton isn’t even that impressed with his playing.

“I’ve always had that held up as like, ‘This is one of the great landmarks of guitar playing.’ But most of that solo is on the wrong beat. Instead of playing on the two and the four, I’m playing on the one and the three and thinking, ‘That’s the off beat.’ No wonder people think it’s so good—because it’s fucking wrong.” – Eric Clapton

So obviously, Clapton is a perfectionist and that always translates to his axeslinging skills. We don’t know about you but the solo in “Crossroads” remains as one of the greatest in our book.

“Sultans of Swing” is an absolute masterpiece. The thing is, it remains criminally underrated. Even after all these years, it didn’t get the recognition and credit it absolutely deserved. It’s ridiculous because it doesn’t take a pro-guitarist to know this has got to be one of the greatest guitar solos in rock history.

“As for the actual solo, it was just more or less what I played every night. It’s just a Fender Twin and the Strat, with its three-way selector switch jammed into a middle position. That gives the song its sound, and I think there were quite a few five-way switches installed as a result of that song.” – Mark Knopfler

Mark Knopfler is an excellent guitarist – anyone who disagrees needs to go listen to this epic track for about 100 times. The song is legendary and only a guitar god could come up with licks like that. Well kids, this is how you do it.

Once upon a time, music was THIS good. We’re actually a bit torn between this and “Mr. Crowley” because we’re not gonna lie, both are excellent. Then again, it’s Randy Rhoads and he never settled for anything less so what else would you expect?

Every note is astounding – Randy Rhoads was just oozing with talent and musicality. It’s not just about speed or technical proficiency but more than that, it’s about the feel. It’s absolutely melodic.

“Randy had the basic riff, the signature riff. Then we worked on music together. He needed something to solo on so I came up with a chord pattern and the section for him to solo over.” – Ozzy Osbourne

Randy went all out with his solo. Plus, the riffs are seriously catchy. He was proficient and he would work on something endlessly until he’s satisfied with the result. He was gone too soon but at least he left us with musical gems like this.

You cannot call yourself a true rock ‘n roll fan if you don’t know this song. Everything about this is epic and that spine-chilling guitar solo is the perfect way to end something as stellar and remarkable as this track. It’s one of those things you have to listen to in order for you to understand its greatness.

We’ll let the music speak for itself.

“‘Free Bird’ was actually one of the first songs we ever wrote… So I came up with those three chords at the end and Allen played over them, then I soloed and then he soloed…it all evolved out of a jam one night. So, we started playing it that way, but Ronnie kept saying, ‘It’s not long enough. Make it longer.’” – Gary Rossington

Well, no matter how many times we put it on repeat, it’s never long enough. And that’s the only thing we don’t like about it, by the way, that it has to end. Something as mind-blowing as this should go on for about 20 minutes more.

If Pink Floyd only released this song and nothing else, they would still snag a spot in the rock ‘n roll pantheon and people will still sing their praises. Yep, that’s how great this song is. And if anything, it only showed how much of a genius David Gilmour is.

It’s relaxing but it has that otherworldly feel to it – as though you’ve just been transported to another time in another dimension.

“I banged out five or six solos. From there I just followed my usual procedure, which is to listen back to each solo and make a chart, noting which bits are good. Then, by following the chart, I create one great composite solo by whipping one fader up, then another fader, jumping from phrase to phrase until everything flows together. That’s the way we did it on ‘Comfortably Numb.’” – David Gilmour

It’s phenomenal. You can feel the emotion in every note and we can dissect it all we want but the fact remains that Gilmour poured his soul here and that’s where the magic happens. It’s hauntingly beautiful but it’s still just a fraction of Gilmour’s brilliance.

This is one wicked solo we just can’t get enough of. Love him or hate him, Eddie Van Halen was a beast at guitar playing. He definitely raised the bar and watching him shred it out is astonishing. Maybe Eddie is a bit overrated but does he deserve all the credit he gets? Yep, no doubt.

If you want to question his axe-wielding skills, just try playing the “Eruption” solo and you’ll find out the hard way that it’s not as easy as Eddie makes it seem. With six strings, he changed the game for every other guitarist.

“I didn’t even play it right—there’s a mistake at the top end of it. Whenever I hear it, I always think, ‘Man, I could’ve played it better.’” – Eddie Van Halen

Man, why do they always think it’s not good enough? If we can nail that solo perfectly, we’d be more than happy. His fingers play faster than we could blink. Okay, it may not be always about the speed but admit it, you found your jaw on the floor the first time you heard this.

2. Jimi Hendrix – “All Along The Watchtower”

Jimi Hendrix was a guitar virtuoso who could out-play anyone. You see, if fellow rock legends are blown away by your talent and skills, then that says a lot. He deserves every single recognition he got and “All Along the Watchtower” made us question whether he’s human or not.

He was innovative and a revolutionary. He managed to pull out sounds from the guitar we’ve never heard before.

“Once Jimi started working on his solos, the session moved very quickly. The thing that occurs to me was how completely prepared he was. One thing that people don’t realize is that Jimi always did his homework.” – Engineer Eddie Kramer

He didn’t just shred – he did it with his teeth, with this guitar behind his back and still, his playing was as stellar as ever. Anyone who knows music and guitar can attest that no one else could do what Jimi did. Even Eric Clapton referred to him as “a fantastically talented guy and a beautiful guitar player for his age.”

Is this even surprising? From the arrangement to the tone and of course, that impeccable guitar solo – this is Jimmy Page in his finest musical moment. It’s intense, powerful and keeps you on the edge of your seat. And then it just keeps building and building – all the other ones on this list cannot even touch this song’s greatness.

It showcased Page’s exemplary axeslinging skills and it basically became the standard to which all others are measured.

“I thought ‘Stairway’ crystallized the essence of the band. It had everything there, and showed the band at its best. I’m not talking about solos or anything; it had everything there. Every musician wants to do something that will hold up for a long time, and I guess we did that with ‘Stairway.’” – Jimmy Page

This is the song every band wished they created. It’s hauntingly beautiful and soulful. You see, more than speed and technical proficiency, it’s also about the control. And Page expertly tugged at our heartstrings with every note. Hats off to this genius.