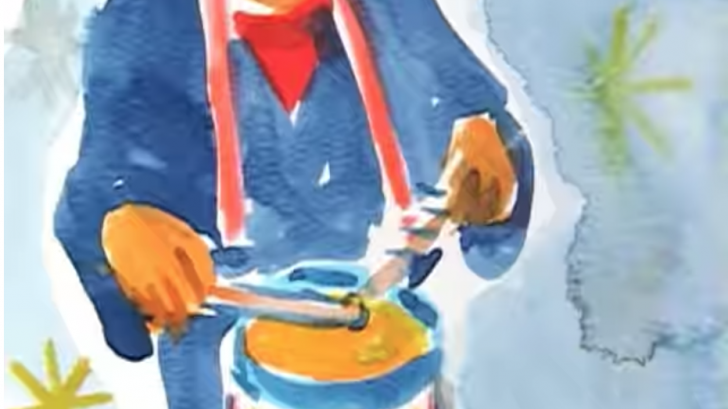 It’s A Work of Art… Literally

The music video itself is a work of art. The amount of work that went into this music video is absolutely shocking.  Regular New York Times artist and filmmaker, Jeff Scher, was commissioned to make all the visuals for Bob Dylan’s “Little Drummer Boy.” Scher re-created classic films using rotoscoping techniques.The craftsmanship of rotoscoping consists of tracing actual studio film. In this case, Scher used watercolors and crayons to draw over the outlines of classic films as they were rolling-live. The colors used where on the lighter spectrum giving us an eyegasm of pastels for the “Little Drummer Boy” video. Back in the early 1990s Scher used to use makeshift projectors for 16mm film using coffee cans and copy stands. This music video is the most beautiful Christmas gift Bob Dylan could give his fans.

Imagine Him Caroling This At Your Door

By now we know, Bob Dylan has a special fondness for Christmas time. He has expressed the joy the holiday brings him in an entire album dedicated to the season, Christmas in the Heart (2009). “These songs are part of my life, just like folk songs. You have to play them straight too,” he explains about the traditional sounding Christmas album.  Leave it to Bob Dylan to make a timeless song with very few lyrics beyond “pa, rum, pa, pum, pum,” into a renovated heart-wrencher. It could be that signature raspy vocal range that makes us feel like train hopping vagabonds or it could be the wisdom he expresses through his sound- but he totally gets us right in the feels. “Little Drummer Boy” is a classic caroling song but it’s not probable that many carolers sound like Bob Dylan.