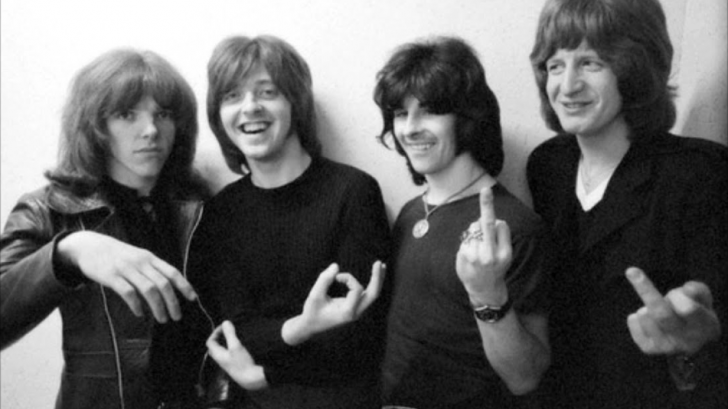 What you’ll hear on this list is not an echo of some sort — it’s the tasty, sweet, and nasty sounds of cowbell and more of it. Here’s our look at Classic Rock Songs That Has Even More Cowbell.

Ritchie Blackmore surely is credited for this cowbell-driven track. Included on his 1975 debut album for his newly formed band, Rainbow along with Ronnie James Dio.

Bad Medicine was one of the few tracks during its era who relied upon a sixth instrument: the cowbell. Released in 1988 from the album New Jersey.

One of Brad Whitford’s greatest contribution with the band, the Last Child provided a warmth welcome attack as they unleashed their spectacular 1976 album, Rocks. But Joey Kramer’s cowbell gave the rootsy feels.

From the band’s first album — and since they didn’t have lots of budget during the production of the record they found themselves relying on a nasty old friend, the cowbell, and more cowbells, and then more and more of it.

You wanna what Steven Adler secret’s recipe for their album, Appetite for Destruction? Well, it’s obvious, of course, the undoubtedly use of cowbell.

5. No Matter What – Badfinger

The criminally underrated band was surely overshadowed by their contemporaries, and being one of them is The Beatles. But I guess the true problem they had at the time — there were no enough cowbells.

Pink Floyd surely knew what people like, and they surely know how to fuel our sex drive, and that of course, with cowbells. Nick Mason was overshadowed, or sometimes ignored, but thanks to cowbell — he got the recognition he deserved.

Lou Reed viciously used cowbell to further his musical career, and he had slept, dine, and traveled with his little metallic friend, the cowbell.

With Wiser Time, The Black Crowes accepted their southern rock heritage by providing doses of slide guitar, and pedal steel. But the most invigorating one was, yes, cowbell.

One of Free’s few hard-rocking songs, All Right Now provided a stripped-down rock and roll authenticity with, of course, the help of cowbell.