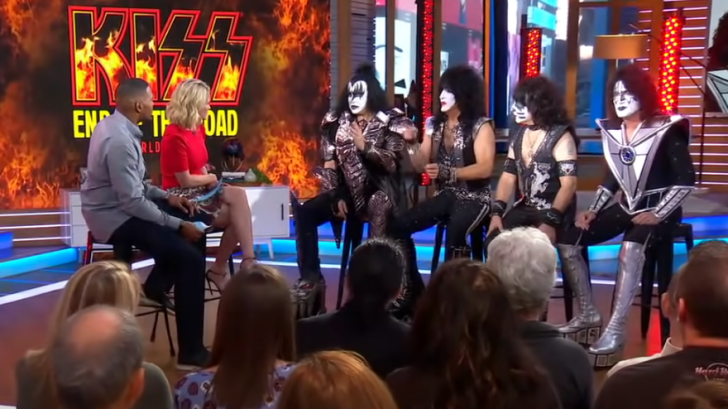 Hard Rock/Heavy Metal band known for their makeup, and for their very elaborate and even exaggerated concerts that include smoking guitars, spitting fire and blood, pyrotechnics, and more.

One of the great rock symbols of the 70s, KISS, went beyond the strictly musical sphere to become an adolescent social phenomenon with sonorous roots in hard rock and glam, spectacular concerts full of pyrotechnics and attractive aesthetics influenced by the comic and the aforementioned glam rock, their characteristic style between hard rock and glam metal, made them stand out in the nascent rock scene of the United States of the seventies, going down in history shortly after together with great bands such as Aerosmith, Iron Maiden, AC / DC and Led Zeppelin, among others.

In the video below, KISS appeared as a guest in the Good Morning America show in 2018. They appeared on the show to promote their fantastic final tour on GMA Day. They speak mostly about the tour and surprises audiences as they pick two super fans to join them on the KISS Kruise.

The KISS Kruise 2018  sailed on Halloween departing from Miami, Florida. Keep going for the video below: