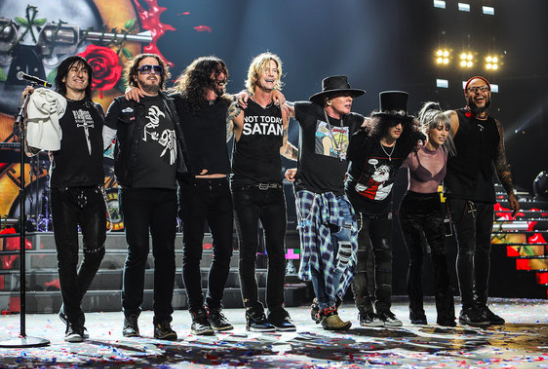 All is well in Paradise

Axl Rose isn’t necessarily known to be a friend of Nirvana. Though Rose was initially a fan of the great grunge band, there did come a notorious fight between him and Kurt Cobain and his wife Courtney Love that broke out during the 1992 VMAs. Dave Grohl as a Nirvana band member back then was of course part of all this chaos.

Now 25 years later, it seems that all the beef and bitterness of the past has since dissipated. For Guns N’ Roses closing set for their Tulsa, Oklahoma show, All Rose invited Foo Fighters frontman Dave Grohl on stage to perform “Paradise City” together. Rose noted that Growl “just happened to be in the neighborhood” and so he invited him to collaborate on stage, much to the delight of fans who came out. The Foo Fighters were in the neighborhood because they were scheduled to play at the same venue the next night.

The performance was such a hit as fans continue to rave about how awesome the set was on social media.

With Grohl rocking it our alongside Slash and displaying his reconciliation with Rose, it did look like a pretty awesome show.