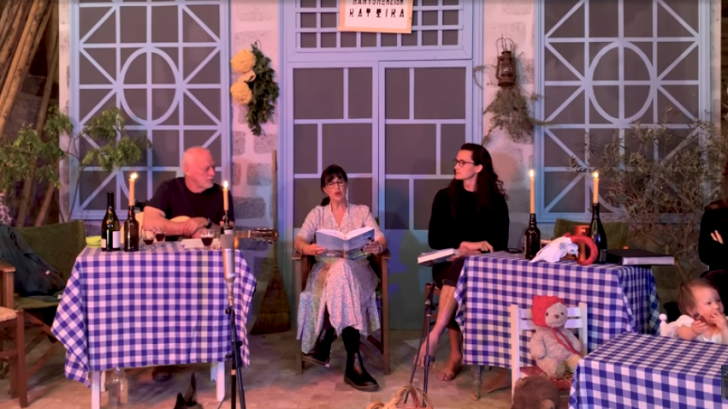 Pink Floyd guitarist David Gilmour with his family hosted another online event in celebration of the release of the new novel Theater for Dreamers, by Polly Samson, Gilmour’s wife.

The setting of the book is on the Greek island of Hydra in the early Sixties, featuring Leonard Cohen as one of the characters, who lived there at the time.

On the family’s first online event, Gilmour played the Cohen tunes “So Long, Marianne” and “Bird on the Wire.” While on this second broadcast, Gilmour dug deeper into Cohen’s catalog and covered “Fingerprints,” from 1977’s Death of a Ladies Man. (You can check it out at 15:45 in the video below).

Cohen’s “Fingerprints” was never been heard by the public until 1977. However, Samson, says it began as a poem in the 60s’. Like the many songs from Cohen’s Death of a Ladies Man, he never performed it live.

David Gilmour also covered “Hey, That’s No Way to Say Goodbye,” from 1967’s Songs of Leonard Cohen with his family. All the four songs performed by the Gilmour family were roughly associated with Cohen’s time on Hydra.