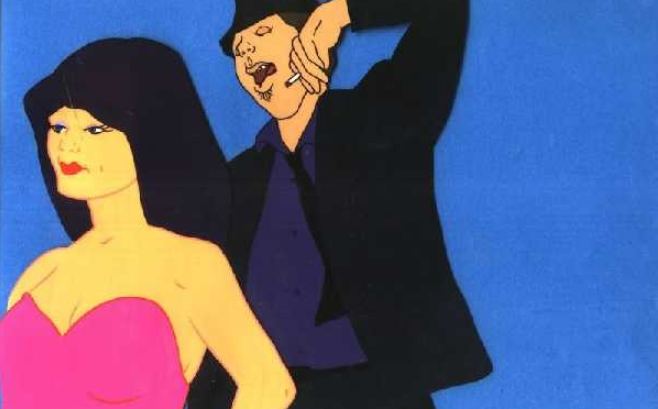 Production cels for "Tom Waits For No One". Photography by Gary Beydler. Copyright John Lamb, 2002.

From the beginning, rock n’ roll has roused with powerful imaginations, limitless fluidity, and an endless palette of creative opportunities with which it captures and communicates ideas that are too big, too wild, or absolutely too bizarre to be transformed into any other form of artistic materialization.

Consequently, rock has always been existing in animation, the category of cinema in which literally anything that the creator can create to become reality.

One of the first entities to recognize the inherent appeal of loud music and bizarre animations to rock devotees was Walt Disney Studios. In 1969, Disney not only relaunched it’s psychedelic musical masterpiece Fantasia but also advertised the film to the stoners as “The Maximum Experience” and even released an official poster that shines in the black light.

Tom Waits’ For No One

Director John Lamb won the Oscar for a best animated short film for Tom Waits’ For No One, the mesmerizing seven-minute animation that portrays in poetry the glories reached in and out of the gutter by the unlucky poet Tom Waits.

The short film’s creators (including Waits) expected to turn the work into a feature film; even more, scenes were created, but regrettably, they lost time and focus on the project. Still, what survives of Tom Waits For No One is sad, moving, and exuberant treasure, and somehow, his incompleteness is in perfect balance with the fundamental aesthetic and commitment to making the artist’s life the center of the film.