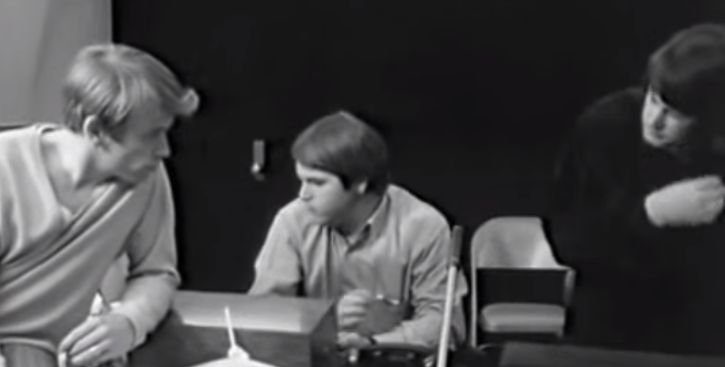 The “Good Vibration” is the last No. 1 masterpiece that Brian Wilson wrote before depression would make his life wretched.

In this rare film footage, you can see him working hard in recording his masterpiece. Deliberately asking The Wrecking Crew (behind the tunes) what to do. You’ll never see such dedication like this in your day of age. He dedicated so much to this record. It was a record that he cared so much about.

After months of isolating himself in his home, Brian Wilson was ready to do another recording for his brothers Carl and Dennis, for his cousin Mike and friend Al. He poured all his energies into writing a new kind of stuff and production that the song began to take shape.

“Good Vibrations” is arguably one of their best songs. It has a wonderful tune. You can see all of them working hard and putting a lot of inputs. It is something different that would last forever.

They are not just another music geniuses. They are hard-working musicians.

“By that time, Brian was showing a lot of genius writing. He was growing all the time and we didn’t know where it would end. I didn’t know about the drugs until later on, but he did start doing things in piecemeal fashion. It was like he was scoring a movie. But 12 dates on “Good Vibrations” – at three hours a date – is a long, long time to spend on one song. It was very unusual. But the way he kept changing the music around was interesting. We knew he was trying to perfect a great hit. And we knew it was gonna be big.” – Carol Kaye (The Wrecking Crew Bassist)

Remember the first time hearing this? We were definitely all blown out when this CLASSIC was released as a single in 1966. They did everything they can to make this masterpiece PERFECT and it turned out to be just like that. It wasn’t gonna turned out to be an average rock song. “Good Vibrations” was a song fated to become a certified platinum record.