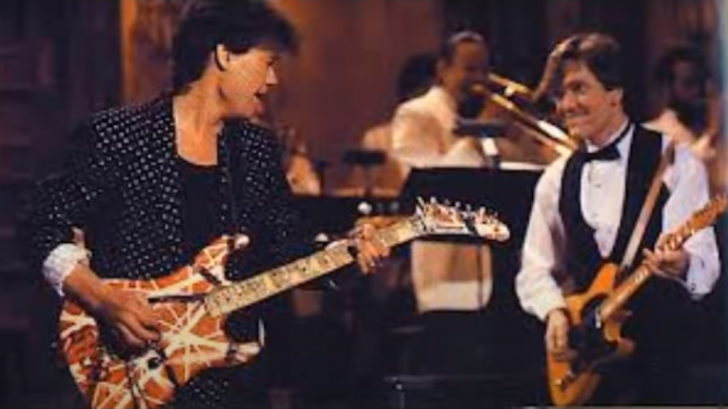 The late musician Eddie Van Halen was honored in the last episode, including a special performance by Jack White. Country singer Morgan Wallen was initially going to be the musical guest for this weekend’s episode alongside debut host Bill Burr. When Wallen was removed from the show for failing to observe safety precautions, White got the call to replace him and the co-founder of The White Stripes seized the opportunity to pay tribute to Van Halen days after his unexpected death

Eddie Van Halen died on October 6 at the age of 65 after a long battle with throat cancer. Since his passing, friends, family, colleagues, and fans have paid tribute to the guitar virtuoso.

Eddie Van Halen’s 1987 SNL Performance resurfaces a few days after his passing and he was amazingly flawless.

Eddie performing Stompin on SNL. Valerie was the host and he accompanied her to the show. The way the story is told, he was hanging out in the music department at Studio 8H when the SNL band asked him if he would be interested in jammin' with them and the rest is history. Enjoy!!!

Late EVH son, Wolfgang Van Halen commented on social media “I can’t believe I’m having to write this, but my father, Edward Lodewijk Van Halen, has lost his long and arduous battle with cancer this morning. He was the best father I could ever ask for. Every moment I’ve shared with him on and off stage was a gift. My heart is broken and I don’t think I’ll ever fully recover from this loss. I love you so much, Pop.”

Dinner at the Van halens Skit!!

Sammy Hagar commented “Heartbroken and speechless. My love to the family.”