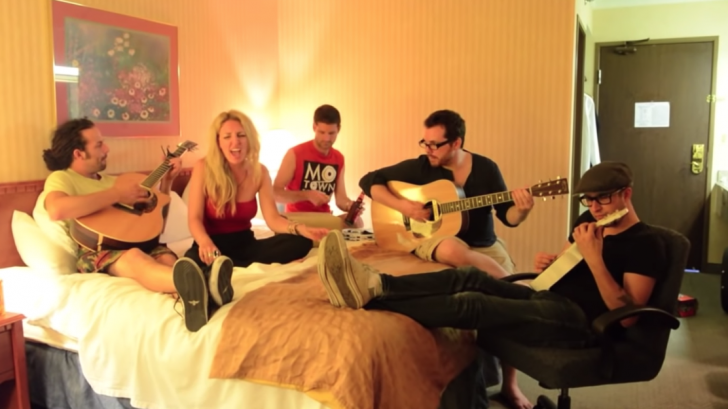 Take A Load Off

The Canadian-American band, The Band,  released “The Weight” in 1968 from the iconic album, Music From Big Pink.  Instantly, the song became a classic and has been covered by… everyone. From Bruce Springsteen, Bob Dylan, The Grateful Dead, Waylon Jennings, Aretha Franklin, John Denver, Weezer- the list really goes on and on. The song is a classic to icons and revered globally as one of the best songs of all time.

The Band’s guitarist Robbie Robertson is credited for writing this song, like many other of the group’s song. Levon Helm, drummer and lead vocalist, disputed this for years. He had said that “The Weight” was a complete collaborative effort and that Robertson wrote approximately 60% of the lyrics and The Band completed the track together. Regardless, the song has served as inspiration for musicians everywhere, and that’s what matters.

The Canadian band recently performed an homage to their fellow Canadian contemporaries with a cover of “The Weight” on the bed of a hotel room. The 5 piece band stripped down their usual production to just a laptop, a ukelele, two guitars, a trash can, and a beer- proving music is a feeling and not a competition. On their YouTube video they state: “We recorded this cover at a hotel in Detroit in July (2013). Big thanks to Scarlet O’Neill for filming, it was such a blast!”

The band varies in size depending on their shows. Their talent is respectively recognized and they have a rapidly growing fan base. Lead singer, Lynzie Kent, was nominated for Toronto’s Best Female Vocalist and the 10 piece band has shared the stage with “Snoop Dogg, Suzie McNeil, God Made Me Funky, Ko, Eva Avila, Esthero and more,” according to their Facebook!  Check out their take on The Band’s “The Weight” and you’ll understand exactly what everyone is buzzing about. It truly is awesome.