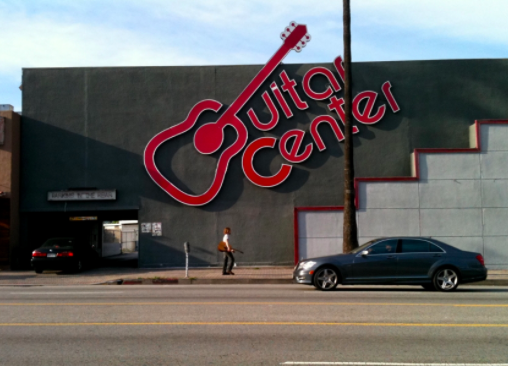 Earlier this year, news broke out that one of the biggest guitar brands Gibson was filing for bankruptcy. It seems that the plummeting sales of guitar brands have strongly affected Guitar Center as well. It looks like what the largest guitar manufacturer is experiencing is directly linked to what will happen to the largest guitar retailer in the US. When Gibson and other big guitar brands were downgraded by S&P, Guitar Center averted the same downgrade just narrowly when they made an emergency loan negotiation to manage their debt amounting to over $615 million. In total, Guitar Center is trying to deal with more than $1 billion in outstanding loans and is facing a serious risk of bankruptcy.

Guitar Center, Inc. remains the largest instrument retailer in the United States with nearly 280 locations.  The store actually started out as ‘Organ Center’ back in 1959, but eventually shifted to ‘Guitar Center’ in the early 70s when the guitar dominated the instrument landscape for nearly 40 years during the emergence of rock n’ roll.

Nowadays, the guitar is already an instrument under duress with sales taking a nosedive in recent years. Washington Post has reported that annual guitar sales are currently below $ 1 million. After 59 years in business, younger producers and musicians who used to drive the guitar sales in the past, have now diverted from the actual instrument and shifting towards digitally rendered music with the popularity of EDM, rap, and looped music.

George Gruhn, owner of the Gruhn Guitars shop in Nashville comments on the changing musical tastes of this generation, saying,

“Most of what’s really selling today is rap and hip-hop. That’s outpacing other forms of music and they don’t use a lot of recognizable musical instruments.”

Because music today is not as guitar-oriented as it used to be, it is the historical musical instruments manufacturers and retailers that are taking the blow.