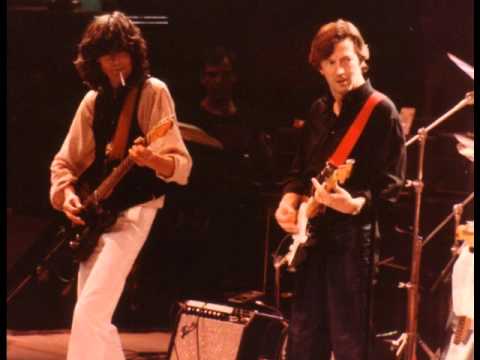 Jimmy Page is one of the most important musicians in rock history. Not only on guitar but also in production, Page made history with Led Zeppelin.

While for Eric Clapton, it was not easy to “survive in fame.” After the resounding success of Cream, without forgetting its previous passage through the ranks of the Yardbirds or John Mayall The Blues Breakers, and the good year with Blind Faith, another supergroup that Clapton founded with Ginger Baker and Steve Winwood that lasted less than 365 Days, the British guitarist seemed to feel the need to get away from the praise and high regard that people had for his talent with the 6 strings.

Eric started with the Yardbirds with a few ‘simple’ solos but full of strength and naturalness. It was in 1963 when he was recruited into this band with blues roots. At that time the guy was 16 years old, so the room for improvement was brutal, but the wood has or has not been had gentlemen, and the founder of Yardbirds (Mr. Keith Relf) saw it as soon as he heard the ‘soul ‘that had his style.

Two years later, in 1965, Clapton is called up by the great John Mayall and his band, a purely ‘progressive blues’ group. The base of this group was the black blues but with more modern chord tensions and bordering on progressive rock in some cases, here he already begins to play with boosters and other guitar effects.

But with Page, interestingly, some criticize the way he plays the guitar. For many, the musician was a little sloppy on the instrument, leaving apparent imperfections in both shows and studio recordings.

Jimmy Page, probably the best electric guitar player in history according to popular opinion, earned that title after years of studying locked between amps and strings, testing things, listening, and trying to imitate rhythms, sounds, and whys. Asking, risking, insisting on understanding the secrets of the instrument. He had made his TV debut with shins and shirt collars peeking out of his sweater, doing skiffle with colleagues from the neighborhood. Then, in a few years, he achieved fame as an expert studio musician before he turned 20. And he made himself big for the Yardbirds up to three times before making them ‘his’ group despite the fact that Beck’s prodigious fingers or the Clapton’s slow hand.

The history of the electric guitar has several milestones in its evolution and there may not be another guitarist who has starred in it more than our protagonist today, Eric Clapton. Since his appearance with the Yardbirds, Clapton became the beacon and illumination of all subsequent British guitarists but neither should his enormous influence in the US be neglected, both Hendrix and Duane Allman were avowed fans and the rest of the world. If Clapton was deified young with a Les Paul Standard as the main instrument, the deity changed his sound and guitar over the following years, marking several generations with his unmistakable style, uniting the worlds of blues and music better than anyone else rocks.

Who do you think is better? Eric Clapton Vs. Jimmy Page?