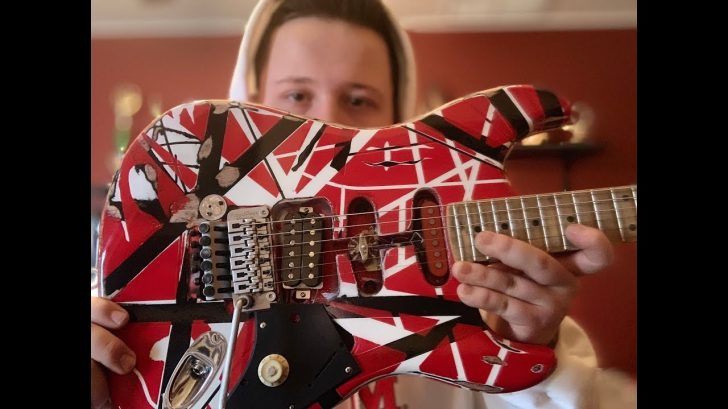 In 1974  Eddie Van Halen wanted a guitar with a unique style. In those years, the musician did not have much money and the possibility of hiring a luthier to make his dream come true was practically nil. This is how he began to build it himself, despite the lack of technical knowledge.

The guitarist approached Wayne Charvel, who ran a repair shop in California and, almost a decade later, established himself as one of the key firms for rock and heavy metal performers. For only $130 dollars ($ 50 for the body and $ 80 for the neck) and this amount at the time was already an expensive one, he took two defective pieces that would be key in the aesthetics of his work.

Under the idea of ​​merging a Fender Stratocaster and a Gibson, the musician installed a single-coil pickup and a P.A.F. humbucker, which he retired from an ES-335, a pickup characterized by its vintage sound and warm reaction.

Thus the Franketsrat was born: While the reddish version of the Frankenstrat is best known to fans of the guitarist, this was not the appearance it originally had. Eddie Van Halen painted the prototype with black and white sprays, while the lines of the latter color were marked with an adhesive tape that he applied to the instrument and then rubbed to reduce its height.

Now in the video below, a guy named, Peter Stewart, uploaded a video where he builds Eddie Van Halen Frankenstrat Guitar for under $500 while staying true to the original look.