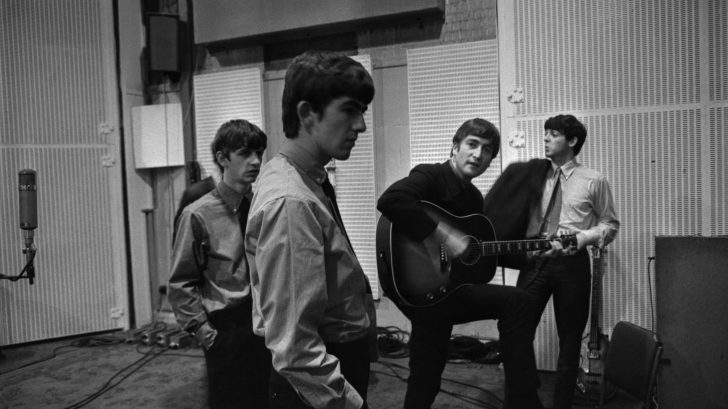 Ringo Starr, George Harrison, John Lennon and Paul McCartney of The Beatles rest between takes in Studio 2 at Abbey Road in London during the recording session for the single 'She Loves You', 1st July 1963. Lennon strums a Gibson J160E guitar and a Neumann microphone is visible on the left. (Photo by Terry O'Neill/Iconic Images/Getty Images)

There’s no argument that The Beatles’ classic “Lucy in the Sky with Diamonds” was a piece of art that was ahead of its time. And it proves to be a timeless piece of music, recorded first in 1967, and still a favorite of many, old and young alike, more than 50 years later. The song was recorded in Studio 2 at Abbey Road, where The Beatles’ creative legacy was birthed.

Today, we have been blessed with the release of the classic hit’s first take recording, raw, and unedited – and it is music gold! NPR has made it possible for listeners to bask in the beauty of the stripped-back track of the band’s first attempt at recording Lucy. The song as we’ve known and heard over and over throughout the years is a version that was recorded with a lot of takes, but there’s a creative ecstasy found in getting a hold of the original raw first take.

In the recording, one could hear the unaltered voices of the Beatles, stripped down instruments, and even some background banter and noise. And you’ll discover that it’s missing the important hook of singing the title line “Lucy in the sky with diamonds”.