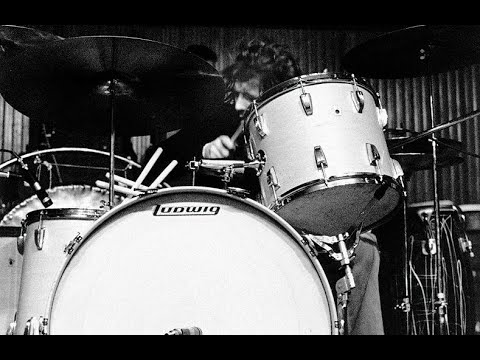 John Henry Bonham was born in Worcestershire, England. According to Rolling Stone magazine, he ranks first in the top 100 greatest drummers of all time.

At the age of 6, he began hitting with sticks everything that came across him. Pans, plates, glass containers, cookie tins. At 10 his mother bought him a drum. Seeing that the hobby took more serious edges, the father (whose name was the same: Bonzo was the third generation of John Henry within the Bonham) gave him a professional drum set. From that moment he dedicated himself to imitating his idols: Gene Krupa, Buddy Rich, Joe Morello. He listened with devotion to jazz drummers.

With a career that included several bands of little renown (Terry Webb and the Spiders, Blue Star Trio, The Senators and Crawling King Snakes) it was with the last group where he played, Led Zeppelin, where he earned his passage to immortality.

Known for his drum solo on Moby Dick which lasted half an hour in some performances. His bandmates could even take a little nap in the middle of the show if they wanted.

Behind the drums, he could do everything that others did and things that only he could. It wasn’t just mimetic ability. It also had a sound of its own. Bonham was the driving force behind Led Zeppelin with his drums and also with bongos, congas, and even the gong.

Witness how incredible of a drummer John Bonham is from this isolated drum track for Led Zeppelin’s classic, ‘Rock and Roll’.