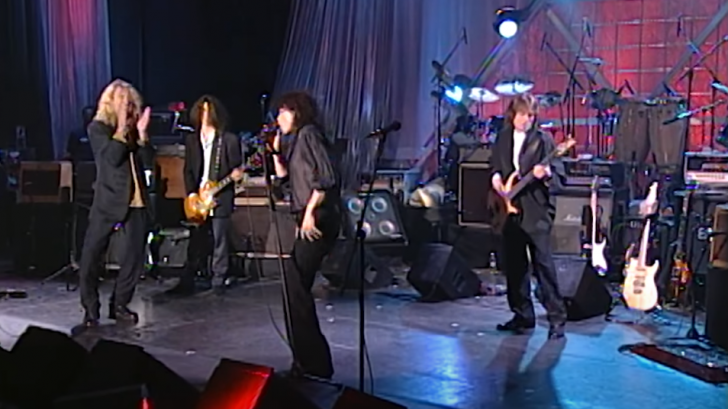 The Rock and Roll Hall of Fame has been occupied by uploading new clips to its YouTube channel from past induction commemorations, and this performance from the 1995 induction ceremony is a must watch.

Below is Led Zeppelin’s Robert Plant, Jimmy Page and John Paul Jones reunited together performing a variety of blues hits with Aerosmith’s Steven Tyler and Joe Perry. Among the tunes played were “Train Kept a Rollin’,” “For Your Love,” “Bring It On Home,” “Reefer Headed Woman,” “Boogie Chillen” and “Baby Please Don’t Go.”

Led Zeppelin’s induction began at an inconvenient time for the band. Jimmy Page and Robert Plant had announced at the time a reunion tour, and they didn’t inform John Paul Jones it was occurring. He only discovered it when he saw a commercial on TV. He took a blow at his ex-bandmates by praising them for “remembering my phone number” at the podium. The group still appeared together, with Jason Bonham on drums, to perform “When the Levee Breaks” with Neil Young and “Bring It on Home” with Steven Tyler and Joe Perry.