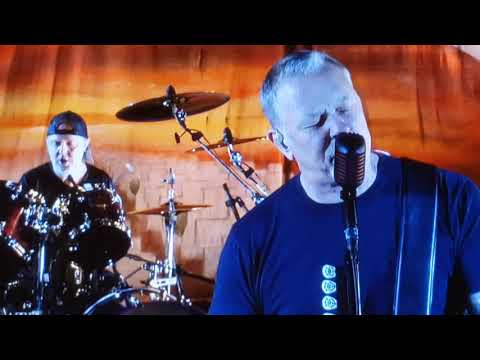 Metallica celebrated the 35th anniversary of their classic third album “Master of Puppets” by performing the song “Battery” on last night’s episode (Wednesday 3 March) of “The Last Show with Stephen Colbert”.

Before that, the band sat down for an interview and performed in Central Comedy’s “The Colbert Report” in September 2013. Most recently, Metallica performed “Enter Sandman” on “A Late Show: Super Bowl Edition”, a special live edition of “The Last Show with Stephen Colbert” on 7 February.

“Master of Puppets” was the first Metallica album recorded after signing a major label deal with Elektra Records.

The record only reached No. 29 on the Billboard album chart, but has sold more than six million copies in the US.

It is the last album with bassist Cliff Burton, who died later that year in a tour bus accident.

Several songs from the album remain staples of Metallica, which includes “Battery”, “Welcome Home (Sanitarium)” and the title track.