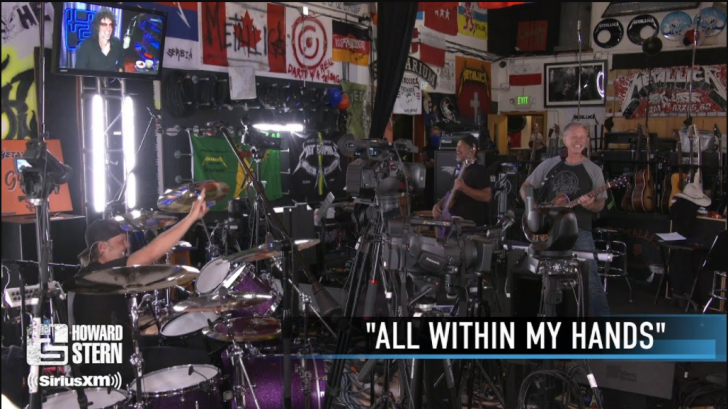 Recently(Aug. 12th), METALLICA did an interview and a brief performance on “The Howard Stern Show”, one of the most popular shows on television (see videos below).

Recorded live from METALLICA’s headquarters in San Rafael, California, the group’s setlist was as follows:

METALLICA announced their appearance on the full-length talk show airing on SiriusXM satellite radio on August 10. The band wrote the following:

“Our great friend, and ever loyal METALLICA supporter, Howard Stern has invited us to pay a virtual visit to his show this Wednesday, August 12. It’s going to be yet another first during this very unusual time as we’ll be hanging in Northern California at HQ and chatting with Howard while he’s camped out in his home studio. Tune in for lots of conversation and some morning metal! Listen on @SiriusXM Channel 100 and in the SiriusXM app.”

METALLICA last performed on “The Howard Stern Show” in September 2016, two months before the arrival of the band’s latest album, “Hardwired … To Self-Destruct.”

On August 10, METALLICA also confirmed their return to the stage for the first time since the September 2019 “S & M²” concerts that opened the Chase Center in San Francisco.

METALLICA will be the first metal band to appear on the Encore Drive-In Nights series, with a full performance on August 29 in hundreds of drive-ins and open-air theaters in the United States and Canada. The show will be recorded especially for the Encore Drive-In Nights series at a location near the band’s Northern California headquarters and will subsequently be edited and mixed by METALLICA’s award-winning production team to the highest possible standards.

The concert, the band’s first show in nearly a year, will feature material from their nearly four-decade career and provide METALLICA fans with an intimate, unique and truly memorable concert experience.

In early May, the four members of METALLICA went through social distancing to record a new version of their song “Blackened”, with each member separated in their own home. The split-screen video was posted on the band’s social media.

In April, drummer Lars Ulrich revealed in a chat that the band could get together to write and record a new album while in quarantine.

METALLICA has been out of the public eye for quite some time since the band canceled a tour of Australia and announced that group leader James Hetfield was re-entering rehab for the first time since 2002 to fight his addictions.

In March, METALLICA announced that their South American tour, which was originally planned for April, was postponed until December. Additionally, the band’s appearances at five festivals in May, September, and October have been canceled.