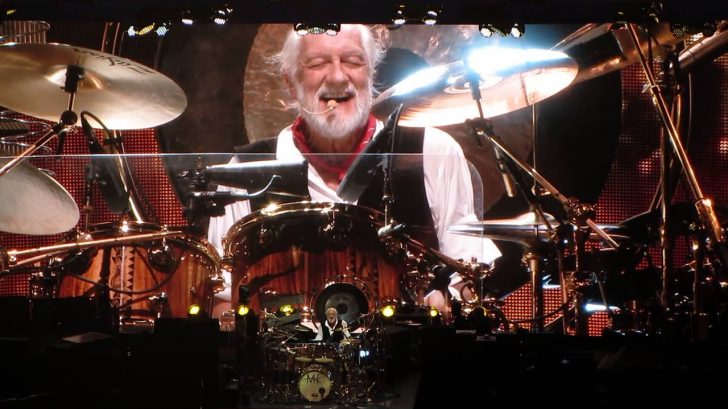 Fleetwood Mac is often seen as the embodiment of rock schizophrenia. At first oblique masters of a visceral blues-rock but continually striving for a mystical transfiguration, then champions of a new crystalline melodic standard, enchanted, enchanted, enthusiastic, also marked by ineffable world fame.

During a conversation with Music Radar, Mick Fleetwood, narrowed down the catalog of Fleetwood Mac picking only of his favorite songs from the band. Take a look:

“Peter Green. Fleetwood Mac. This is probably, almost, my favourite song. It kills me. Peter kills me. He was my friend, remains a friend, and he started Fleetwood Mac with me in 1967,” he said of the song.

On the other hand, listening to ‘Love That Burns’ is quite a challenge, but not because they are complex pieces or anything like that, but because it is impossible to listen to them and not fall asleep due to their exaggerated slowness.

Go Your Own Way

“Lindsey walked in with a demo, in his wonderfully ordered fashion from the days when he’d just joined Fleetwood Mac until he realised that John and I played in a certain way,” Mick recalled, “Which was compliant to the structures and aspirations of a songwriter”.

One of the best and the one selected as Rumours single was ‘Go Your Own Way’, an emotional tear in itself, with a central instrumental section where tension and emotion are palpable. The final guitar solo is downright impressive, a total catharsis that removes any suspicion of the commerciality with which this album is associated.

“On this song, you hear structure, yes, but you also hear me being incredibly free to break into the shuffle at the end, which was not supposed to happen, but it did and we went, ‘Oh my God, we really like that.’ I really loved that because it was my way of participating in creating the character of the song,” he says.

And in a certain way ‘Rattlesnake Shake’ maintains the pulse of ‘Black Magic Woman’, although it loses its freshness by employing a fairly similar rhythm.

“This is a Lindsey Buckingham album, written for the Tusk album,” recalled Mick Fleetwood. “I redid it this for The Visitor, the album I recorded in Africa, and the reason I did so was because I really loved the song and wished that I’d written it. I approached it with a whole ensemble of African musicians, so as a percussion player, during these recordings, I was, as we say in England, ‘like a pig in shit.’ I had the greatest time playing with these musicians on this rendition of this particular song.”

‘Walk A Thin Line’ is also quiet but contains glorious vocal work that turns what the chorus sounds like (“I said / Take your time / But no one was listening / I walk a thin line ”) in a display of vibrant melodies and harmonies that are masterfully linked.

“Dreams is a given,” Fleetwood says. “I think it’s the most famous song that Stevie ever wrote. The intro, I think is one of those stupidly simple things that came from the drummer who played with Al Green and The Staple Singers, so it’s from my love of what I call ‘greasy music.’ It has a real feel, and it’s lazy, behind the beat – stupidly simple but well-thought-out.”

Stevie Nicks’ contribution to couple psychoanalysis is the equally popular ‘Dreams’, in which you have to let yourself be carried away by Stevie’s dreamlike atmosphere and mesmerizing voice, with a special cadence that conveys warmth and relaxation.

“I’m a sucker for this one because it really is a structured song, which is so appealing to me as a player,” Fleetwood explained. “Basically, it’s me playing a slow blues with Christine.”

In Christine McVie’s ‘Oh Daddy’, they masterfully play with stops and musical tension, as well as possessing beautiful melodies and vocal harmonies.

“It’s two minutes of madness that I love. It’s a stop-and-start song, and to this day I get the heebie-jeebies thinking that I’m going to mess it up – which is good because that’s the child in me.”

If we have to mention hard rock, it is obligatory to highlight ‘Oh Well’, a dazzling song that served as a clear example for Led Zeppelin to record their ‘Black Dog’, since it alternates the calm sung parts of Green (of which Robert Plant surely learned too) with some brutal instrumental passages of rock power that is among the best of this early Fleetwood Mac era.

“This is Mick Fleetwood gone AWOL. I really enjoyed working with Lindsey, who put the structure down. The song had basically been discarded during the Tusk sessions, and no one knew what to do with it. We’d made this jam song. The crazy jungle beat is very much a Mick staple diet.”

Overall, we are faced with another work that denoted the state of grace in which they were in the creative aspect, spurred by the special chemistry that existed between the members when each one contributed their corresponding part, whether in composition or in the execution.