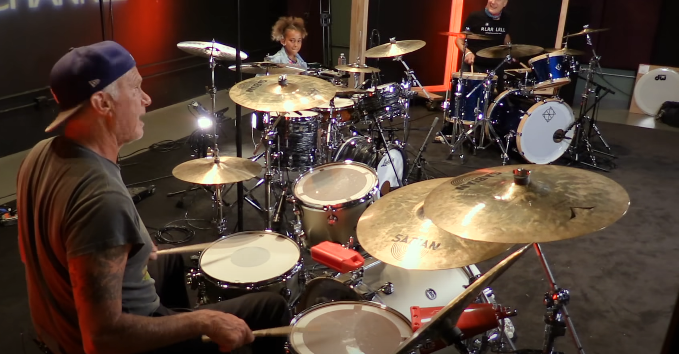 The young prodigy met once again with  Red Hot Chili Peppers’ Chad Smith, and with jazz drummer Gregg Bissonette to do masterclass drum lessons from both legends.

UK music prodigy Nandi Bushell just had an absolutely ‘amazing’ trip to America. The 11-year-old YouTube sensation not only made headlines by joining the Foo Fighters on stage for an epic performance of “Everlong,” but he also performed with Rage Against the Machine guitarist Tom Morello and his son Roman.

The drummers showed him how to play some Beatles and RHCP tunes, while Nandi also showcased her drumming skill by playing some Samba music. Invited to the Ellen Degeneres show, the prodigious girl said she was drawn to drums after listening to Ringo Starr on The Beatles records.

With the support of her parents (who manage her social networks), Nandi has become an expert musician who covers the best of rock. She was praised by bands like Metallica, Coldplay, and musicians like Lenny Kravitz, who invited her to play with him for a while at London’s O2 Arena.

Nandi Bushell is just starting her journey down the path of music, but she’s already phenomenal. She does not sing or dance, as most 11-year-old girls do on those platforms, but plays the drums like a beast. Keep going for the video below: