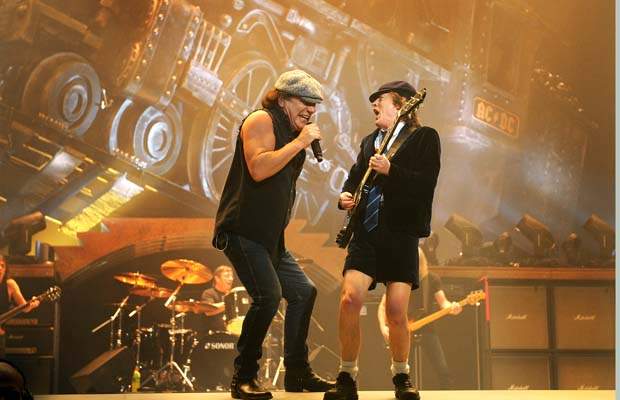 We’ve been speculating things regarding the future of our favorite rock band, AC/DC, and today we still continue to speculate about their plans for new music, — as a photograph of guitarist Angus Young spotted at a Vancouver Recording Studio has circulated in the world wide web.

A Journalist named Steve Newton was the one who published an image of the iconic schoolboy rocker with his nephew, rhythm guitarist Stevie Young, having a break behind The Warehouse taken by two fans named “Crystal Lambert,” and Glenn Slavens, who captured also capture a similar photo of frontman Brian Johnson and drummer Phil Rudd in the same location. (link)

Newton writes on his blog:

“There might not be any newer ones to come, because word got out that the Aussie ear busters were being spied on, and now there’s a big umbrella on the deck blocking the sight of any legendary rockers sipping coffee or whatever’s in those white mugs.”

Having to spot four members of AC/DC tells a story that they might get back on track and bring fans new music; the only remaining question is who will be handling the bass after the retirement of longtime member Cliff Williams in 2016.