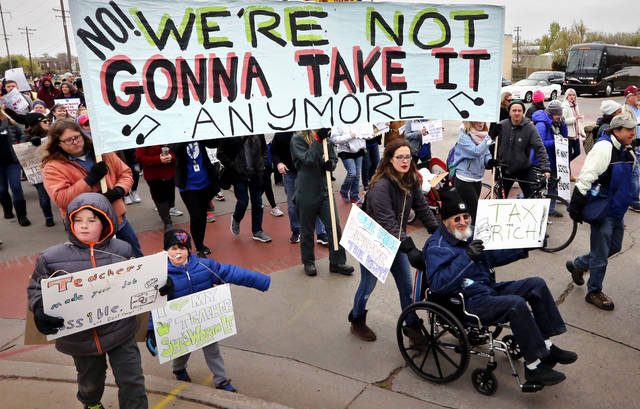 Photo Courtesy of newsok.com by Steve Sisney, The Oklahoman

Dee Snider is proud and confused

The Oklahoma teacher walk out that has been happening right now has been gaining much attention nationwide. Tens of thousands of public school teachers have gone on a strike to demand $3.3 billion over the next three years for school funding, benefits, and pay raises for all public employees. The state-wide teachers’ strike began on Monday, April 2 and is expected to continue until next week.

To make the strike more interesting, a group of music teachers busted out their various musical instruments to play “We’re Not Gonna Take It” by Twisted Sister in the style of a marching band. It has since become “the unofficial anthem of the growing teachers’ movement,” according to CBS.

With the rapid increase of media attention the strike was getting, it wasn’t long until it caught the attention of Twisted Sister frontman himself,  Dee Snider. The singer tweeted, along with a Washington Post article about teachers playing “We’re Not Gonna Take It” as their unofficial anthem:

While I totally support underpaid teacher's cause, it is kind of weird that a song that was on the "Filthy 15" is now every oppressed groups battlecry. #GODBLESSAMERICA! https://t.co/G7PBHpgsIZ

The teachers union of Oklahoma demands an increase in pay for teachers, bus drivers, custodians and other staff. They are also demanding the restoration of more than $100 million that’s been cut from Oklahoma’s education budget over the past decade.

President Donald Trump and Paul Ryan also used “We’re Not Gonna Take It” during their campaigns in the 2010s, but Snider specifically requested that both candidates stop using his song for their political purposes.