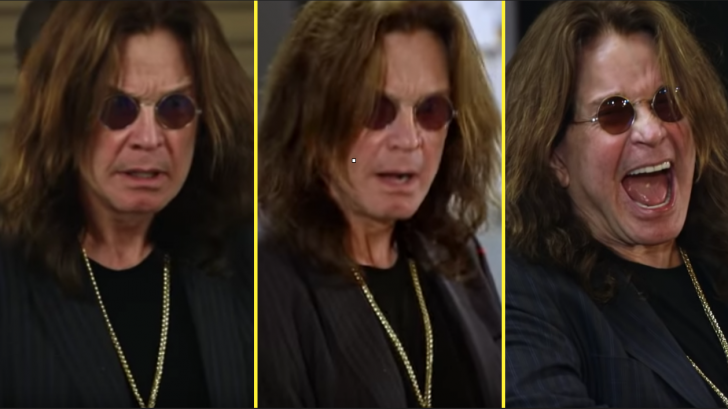 You’d think that at 70, it would be hard to get the jump on a guy like Ozzy. I mean, honestly – what could possibly surprise a man who’s quite literally seen it all, done it all, and lived to tell about it? Luckily, Ozzy is still pretty easy to surprise – even though he hates surprises – as proven by son Jack and granddaughter Pearl and the sweet, hilarious gift they cooked up.

In a previously unreleased clip from his show Ozzy & Jack’s World Detour, Ozzy is driven to an undisclosed location where a surprise awaits him courtesy of Jack and Pearl. Of course, Jack drops hints along the way, asking about Black Sabbath and how he feels about pop culture figures adopting his music, but Ozzy is none the wiser and has no idea what awaits him when the Osbourne clan arrives at their destination.

He walks into what looks like an abandoned practice space, complete with a giant red and yellow striped sheet over what looks like a stage and, true to form, asks “What the f—? Where the f— am I?” until finally, the moment arrives.

At this point, Ozzy is cracking up when he realizes that Mac Sabbath is playing “Frying Pan” – a tasty parody of Black Sabbath’s “Iron Man,” complete with a grill full of sizzling meat patties to set the mood just right.

Mac Sabbath frontman Ronald Osbourne doesn’t look even remotely nervous as he plays his little heart out in front of Ozzy Osbourne, and when it comes time to meet the man himself, Ronald is cool, calm, and absolutely thrilled to have had the chance to share his music with Ozzy.

Happily, Ozzy loved Mac Sabbath’s performance every bit as much as Jack and little Pearl knew he would. “To be honest with you, I was just watching the clownery,” says Ozzy at the clip’s end. “It’s fun. … If you can’t stand the laugh, don’t f—— do it.”

Check it out in the video below!