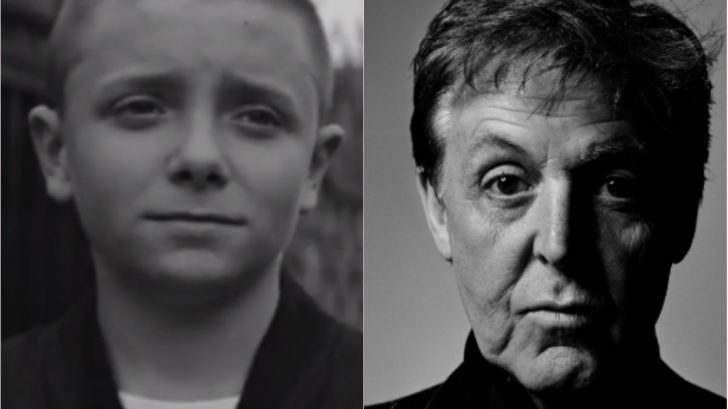 Paul McCartney’s music video for his newest single “Fuh You” is surprisingly heartwarming. “Fuh You” is the third single from his newly-released album Egypt Station. The adorable music video opens with a young teenie bopper couple walking up to the girl’s house and then sharing a sweet kiss outside of it. Their moment was abruptly interrupted when the girl’s mother tells her to go back inside and yells at the boy Jamie to get a phone. The young boy looks quite a bit like a young Paul McCartney only he’s sporting a buzz cut instead of the signature floppy hair. Karen, the young girl, mimes to Jamie from her bedroom window to call her which has the young boy grinning as he walks through the streets, singing McCartney’s song.

The video setting is almost a give away — it was shot on the streets of McCartney’s hometown of Liverpool where the Beatles started their career. Ryan Tedder produced the song and McCartney described it as  “sort of a love song, but a raunchy love song.”

Macca continued, “So it was like ‘Come on baby now. Talk about yourself. Tell the truth, let me get to know you’ and basically I wanna know how you feel, you make me wanna go out and steal. I just want it for you. So that was the basic idea and it developed from there… sort of a love song, but a raunchy love song. There you go – fuh you.”

Though, you gotta admit, a young boy all smiles and grins looking happy walking down the streets of Liverpool is quite adorable but him lip-synching “I just wanna fuh you” is a maybe little weird. We can be sure this kid is learning what raunchy love songs are.

Watch the monochromatic music video for ‘Fuh You’ below: