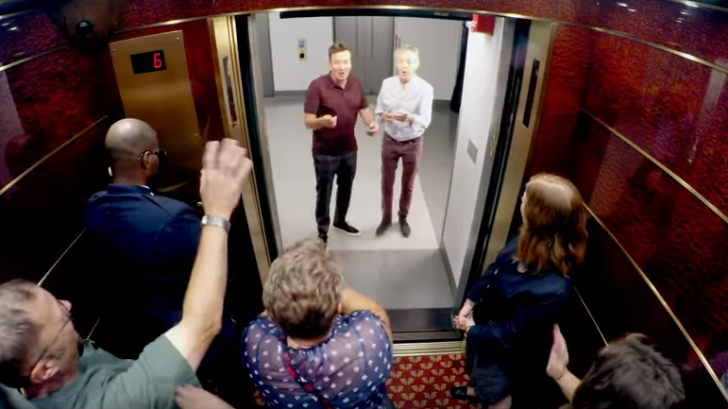 What Would You Do If This Happened To You?

We all know Paul McCartney is cool – maybe not Steven Tyler kind of cool but he definitely knows how to have fun and also make his fans feel loved. And so during his guesting on The Tonight Show Starring Jimmy Fallon, they surprised some Beatles fans riding an elevator in 30 Rockefeller Center. Okay, we won’t spoil anything for you but we’re telling you right now, it’s downright hilarious.

Imagine if you were there (we’d either faint or scream, no in-between) – none of them expected to see Paul McCartney himself. And it’s probably an understatement to say that this is definitely a once-in-a-lifetime experience for them. Besides, if you didn’t think Paul was anything but funny, then maybe haven’t seen him tell a dirty joke (that’s another video you NEED to see).

The guy’s a natural! Add that to the list of his amazing talents.

It’s been an interesting month for Paul because he just earned his first no. 1 album in the Billboard 200 after over three decades with “Egypt Station.” He released the record last September 7 and by the 13th, sales were already at 153,000 units.

That’s why he’s been busy with the promotion – from the carpool karaoke on The Late Late Show With James Corden to other appearances in radio stations and podcasts.

Also, can we take a moment to appreciate how at 76 years old, Paul McCartney looks so good and still has that same energy when it comes to his music? He’s also set to embark on a tour starting this September 20 in Bell Centre, Montréal.

2018 may almost be over but Paul McCartney is just getting started.