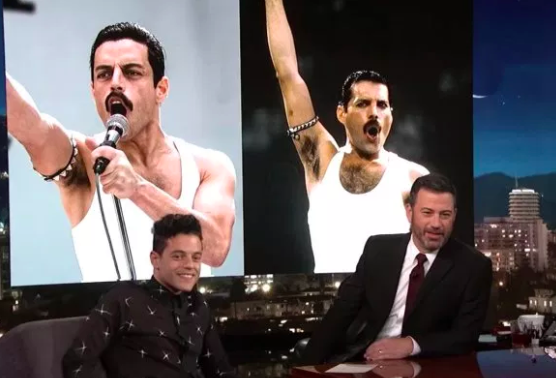 In a round of press for the upcoming Freddie Mercury biopic Bohemian Rhapsody, star Rami Malek stopped by Jimmy Kimmel Live! on Tuesday night and opened up about taking on the role of one of the greatest rock icons of all time.

Kimmel has nothing but praise for the ‘Mr. Robot’ actor and even suggested that an Oscar is in the radar after his portrayal of the Queen frontman – who died from pneumonia complications due to AIDS in 1991, aged only 45 – and Malek is quick to brush it off saying,

“The greatest honor I think from playing someone like Freddie Mercury is getting the acceptance of the legendary bandmates, Brian May and Roger Tayler.  Malek told Kimmel. “I’m not gonna lie and say I wouldn’t consider [an Oscar] a massive accomplishment.”

Malek already received an Emmy award for best actor for his role as Elliot in the highly-acclaimed show Mr. Robot, and he’s open to adding an Oscar to his list of prestigious acting accolades.

Malek also reminisced about filming the band’s most legendary moments, interacting with two of the living members and meeting Mercury’s family, and how satisfying that was for him.

Malek says the most challenging scene was done on the first day, re-enacting Queen’s performance at Live Aid at Wembley in July 1985, when the band walked out in front of a 72,000-person crowd.

He said: “We shot the most iconic performance in rock history – Queen playing at Live Aid – on day one.

“Our first shot was the four of us coming out onto Wembley Stadium stage as the members of Queen.”

“Bohemian Rhapsody” will be out on theatres come November 2nd.