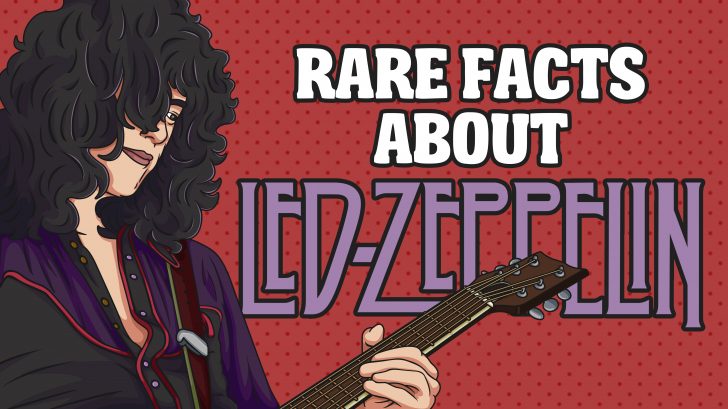 Here are some facts about the band you probably will be learning for the first time. Like it or not,  you are bound to give Led Zeppelin a whole lotta love for these fascinating snippets of things about them:

THEY WERE ORIGINALLY CALLED THE NEW YARDBIRDS

In 1968, Plant was actually discovered by now-legendary guitarist Jimmy Page who was in search of a lead singer for a new band he was forming, called the New Yardbirds. After hearing Plant perform, Page was amazed. Page shares,  “When I auditioned him and heard him sing, I immediately thought there must be something wrong with him personality-wise or that he had to be impossible to work with, because I just could not understand why, after he told me he’d been singing for a few years already, he hadn’t become a big name yet. So I had him down to my place for a little while, just to sort of check him out, and we got along great. No problems.” Plant joined the group, and in turn, recommended drummer Bonham to Page. They then added John Paul Jones as the fourth member of the group. Jones was recruited as the bassist/keyboardist.

The four guys started playing together at a record shop on Gerrard Street in London and went on a short Scandinavian tour in 1968 as the New Yardbirds.  After the album was complete, the band was forced to change their name due to a cease and desist order from musician Chris Dreja who was part of a band called Yardbirds. The band came up with “Led Zeppelin” because some people in the band stated that they would all go down like a “lead balloon” which was a British idiom for “disastrous results.” The results have been the opposite of disastrous until the untimely disaster of Bonham’s sudden death the world did not expect.

FOR ONE NIGHT, THEY WERE KNOWN AS “THE NOBS.”

A  direct descendant of the Danish Count Ferdinand von Zeppelin, Frau Eva von Zeppelin,  believed that the band was dishonoring her family name and proceeded to demand that the group change their name. On February 28, 1970, Led Zeppelin complied to the demand of Frau Eva and  performed as The Nobs in Copenhagen. The next show, the band resorted back to Led Zeppelin after people’s opinions, popular and critical, said they preferred that over “The Nobs”. They never changed their name again since.

THEY HAVE BEEN SUED FOR PLAGIARISM A COUPLE OF TIMES

In 2010, folk singer Jake Holmes filed a plagiarism lawsuit against Led Zeppelin claiming that he wrote “Dazed and Confused”. Holmes opened for The Yardbirds in August 1967. The Yardbirds drummer Jim McCarty and bassist Chris Dreja (the one who forced to The New Yardbirds to change their name to Led Zeppelin due to a cease and desist order) purchased Holmes’ debut album with his song “Dazed and Confused” on it for the band, which included Jimmy Page.

Jimmy Page was credited as the sole writer of Led Zeppelin’s “Dazed and Confused” from their first album.

The famous intro of “Stairway to Heaven” sounds eerily identical to the intro of the song “Taurus” by Spirit.

“Taurus” was released in 1968, three years before “Stairway to Heaven” came out. Randy California, singer of Spirit, and Jimmy Page of Led Zeppelin toured together in early 1968 until 1969. Randy California was just 16 years old when he formed Spirit and there is no record of him demanding for royalties for his songs even up to his death in 1997. That’s when things took a mad turn. The estate of Randy California filed a lawsuit against Led Zeppelin after his death in 1997 for taking the intro from “Taurus” and making it part of “Stairway to Heaven” then gaining millions of profit and recognition for it.

In June 2016, the judge for the case cleared Led Zeppelin of plagiarism and stating that the riff Led Zeppelin was accused of taking from Spirit’s 1967 song Taurus “was not intrinsically similar” to Stairway’s opening. The jury has found that Led Zeppelin did not, in fact, copy the opening chords of Stairway to Heaven from Spirit.

THE FOURTH ALBUM IS TECHNICALLY UNTITLED

Led Zeppelin released their fourth studio album without a title – not that it needed one anyway, as the music clearly spoke for itself. But this untitled album (also popularly referred to as Led Zeppelin IV, LZ4, Zoso, Four Symbols, or just simply IV) is what catapulted the band to achieve global rock god status. The lack of any title printed on the album was done deliberately by the band as they wanted to identify themselves with specially-chosen symbols instead and of course, by the greatness of their music. And they totally proved themselves right with the massive success of Led Zeppelin IV, which contained one of the most iconic rock songs of all time, the ever so timeless “Stairway to Heaven”. The album has more sold more than 37 million copies world wide and was certified 23 times platinum. From Jimmy Page’s incredible jaw-dropping guitar solos to Robert Plant’s energetic vocals, to John Paul Jones heart-stopping bass playing, to John Bonham’s epic drum skills, it makes sense why this particular album reached the peak of creativity and commercial success it so deserved!

After one of the band’s marathon three-hour concerts in Los Angeles, Harrison warmly greeted Zeppelin backstage by exclaiming, “F**k me! With the Beatle,s we were on for 25 minutes and could get off in 15!” Harrison was an avid supporter of Led Zeppelin and friends with the band members. Behind his compliments, the Beatle was apparently disappointed by the band’s lack of mellower numbers.

“George was talking to Bonzo one evening and said, ‘The problem with you guys is that you never do ballads,’” Page told biographer Brad Tolinski. “I said, ‘I’ll give him a ballad,’ and I wrote ‘Rain Song,’ which appears Houses of the Holy. In fact, you’ll notice I even quote ‘Something’ in the song’s first two chords.” He gave the song the sarcastic working title of “Slush”, knowing fully while recording it, that the song didn’t exactly live up to Zep’s hard-rocking signature.