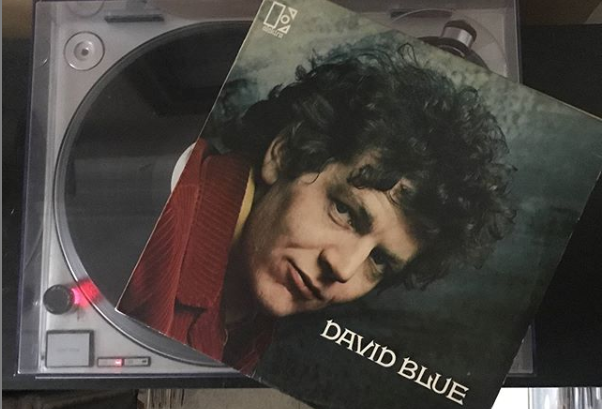 David Blue was a perfect singer-songwriter in the Greenwich Village folk music revival in the 1960s. On December 2, 1982, he died of a heart attack while jogging in Washington Square Park, the epicenter of the New York University neighborhood and the heart of the Village. He was only 41 years old.

David Blue was called: Stuart David Cohen. He went straight to New York, in 1960 to become an actor. He was part of the circle at Greenwich Village that included Bob Dylan, Tom Paxton, and Eric Anderson.

Starting in 1971, he made eight albums for Warner-Reprise and Elektra-Asylum. He participated in Bob Dylan’s famous “Rolling Thunder Revue” tour in 1976.

But his solo recording career stalled, though Van Ronk’s was worse. Blue briefly joined Bob Dylan’s Rolling Thunder Revue before trying his hand at acting. He was a curious actor.

As an actor, David Blue appeared in Wim Wenders’ “An American Friend” and was the narrator in Dylan’s movie, “Renaldo and Clara.” He also played a major role in Neil Young’s curious “Human Highway”.

David Blue used to perform in the company of Van Ronk, Phil Ochs, and Bob Dylan. Perhaps at that time, he was the one with the most charisma and the most self-confidence on stage.

David Blue’s first LP looks like a hit on Highway 61 recorded with a grumpy blue on a leather jacket. His music is very similar to Dylan’s in Blonde on Blonde. But lo and behold, the lyrics were even better than I’ve heard recently.

David Blue is also well known for writing the song “Outlaw Man” for the Eagles, which was included on the 1973 album Desperado, and was also released as his second single from this album. Blue’s original version of “Outlaw Man” was the title track of his Nice Baby and the Angel.