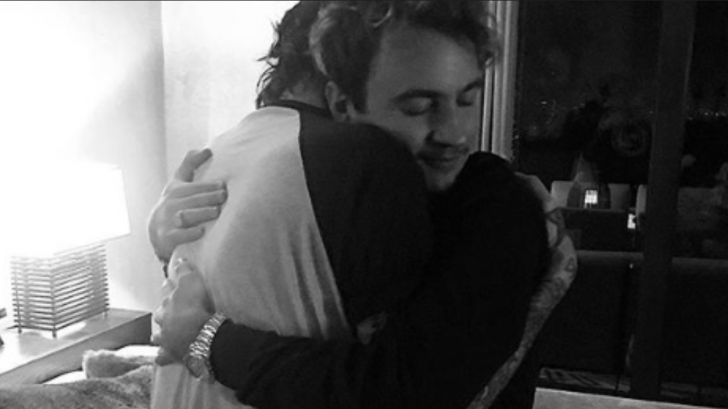 It’s going to be a holly, jolly Christmas indeed for the Lee family this year!

Former Mötley Crüe drummer Tommy Lee and his son, Brandon, have reconciled after the violent brawl that left them estranged for much of the year. Lee, 55, shared a photo to Instagram last night of him hugging Brandon, 22, both father and son looking relieved at having settled their differences and forgiven each other at long last.

Even the caption is sure to tug at your heart – rather than try to stick a lengthy explanation that he doesn’t owe anyone but his son, Tommy simply said, “I love you son,” four words that hold more weight than any lengthy caption ever could.

I love you son @brandonThomasLee

Back in March, we reported that Tommy and Brandon were in the middle of a vicious feud following a domestic dispute at the Lee household.

According to TMZ who initially broke the story, “police confirm with TMZ when they took the initial crime report they were told Brandon and Tommy Lee were arguing over a social media post” – presumably the one Lee made about Brandon’s mother, Pamela Anderson, in regard to her interview with Piers Morgan.

Additionally, Lee took to Twitter to tell his side of the story, saying that he was in bed with Furlan when Brandon burst in late Monday night and knocked him unconscious before taking off prior to the police arriving on the scene.

Hey @TMZ maybe get your facts straight before you go reporting bullshit. My fiancé and I were in bed when my son busted into the room and assaulted me. I asked him to leave the house and he knocked me unconscious. He ran away from the police. THAT’S the truth.

Though Tommy initially wanted to press charges, the charges against Brandon were dropped.

Now, it’s looking like father and son are well on their way to leaving this dark moment in their relationship where it belongs: in the rearview mirror. If this isn’t a Christmas miracle, I don’t know what is!