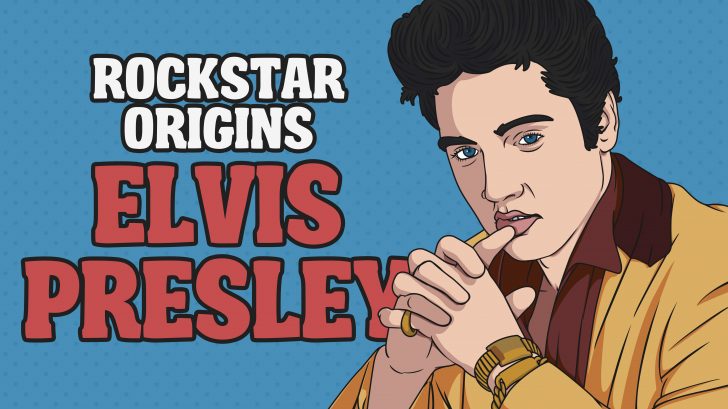 He rose to fame in the mid-1950s — notably known on the radio, TV, and the silver screen at the time — and still is one of the biggest names rock ‘n’ roll has ever known.

What Do We Know About Elvis Presley?

He was born in Tupelo, Mississippi on January 8, 1935. He started his career from very humble beginnings and grew up to be a legend. During the mid-1950s, he appeared on radio, television and the silver screen. Sadly, he died on August 16, 1977, at such a young age, 42. His cause of death was heart failure, — connected to his drug addiction. Since his death, Elvis Presley has remained one of rock n’ roll’s biggest name.

He died of heart failure due to his addiction to prescription drugs.

Where Did He Live

One of Presley’s famous house is on Memphis Home, Graceland, and it is open to the public. Numerous fans from all over the world had visited the place where the legend resided, especially around his birthday and death anniversary.

Elvis Presley was married to Priscilla Beaulieu in 1967 but later divorced in 1973. He had one daughter with her, named Lisa Marie, who was born in 1968.

How Did He Get Into Music?

He was raised and loved by working-class parents. Presley and his family had to move from place to place often. He deeply loved his parents, especially his mother named, Gladys. Raised to have a strong faith in God, where gospel music became his first important influence for him to pursue a career in music.

Presley got his first guitar as a gift given by his mother on his 11th birthday in 1946, and just a few years later, he had his first taste of rock n’ roll success when he won a talent show at Humes High School in Memphis. When he graduated in 1953, he had worked to several jobs to support his family while, at the same time, pursuing his dream. He recorded his first demo at Sun Studio and before long, Sam Phillips, the record label owner, decided to take the young Elvis Presley under his care. Presley, not so long, began touring and recording, trying to hit that taste of big success. His first single called “That’s All Right” was released in 1954.

The good looks, the unique musical style, and of course, the incredible talent had helped him to develop a following with fans in 1955. He also signed with RCA Records that same year, a deal that his manager, Colonel Tom Parker worked out. He caught his first big break, scoring his first No. 1 single with  “Heartbreak Hotel,” including his first No. 1 album, “Elvis Presley.” And later that year, he signed a movie contract with Paramount Pictures.  All those charm and sexy dance moves caused him also to become a popular guest on numerous tv shows.

Service To His Country

The legend was everywhere – be it on the radio, television, and the silver screen, — as a musician and even an actor. He got his first film in 1956, titled “Love Me Tender,” and it was a box office hit. He even got the attention of the U.S. Military with dashing personality and thriving career. He got drafted in 1957 and inducted into the Army. He served in Germany for about a year and a half, and shortly before leaving for Europe,  his mother died. He was granted to leave the service and get back home to attend his mother’s funeral. Saddened by his beloved mother’s death, Presley returned to duty. During his stay in Germany, he met a young girl named Priscilla Beaulieu, who helped to lift him up.

When he left the Army in 1960, Presley resumed his career as a musician and movie actor, and by that time he got back at the top of the charts with the soundtrack for his own film “GI Blues.” He continued to thrive more with his music and acting in such films as “Blue Hawaii (1961), Girls! Girls! Girls! (1962) and Viva Las Vegas (1964).” All his works have brought in a profit and huge amount of success. By the late 1960s, the charming performer appeared to be losing his credibility to hit the box office. He recorded his first TV Special in 1968 to prove that he was still the “King of Rock N’ Roll,” it was the notably known “68 Comeback.” He shocked everyone with his performance and showcased his talents in singing and guitar player, and leave his audiences jaw-dropped.

The personal life of the legend was not doing so well. He and Priscilla wed in 1967 and had a daughter, Lisa Marie. Sadly, the happily married couple wouldn’t last for long. By the early 1970s, their joyous marriage was falling apart, and by 1973 they divorced, and Priscilla received the custody for their daughter, Lisa Marie. The depression hit him — he battled with his personal problems including the growing addiction to prescription drugs; weight problems, and the lifestyle he chose that destroyed him internally.

Despite his personal problems, he still managed to draw attention in Las Vegas and on tour. His last concert was in Indianapolis, Indiana in June 1977. After his last concert, he then went back home to his Memphis Mansion, Graceland, to prepare for another tour.

The Death Of A Legend

August 16, 1977, was the day when we lost a living legend, Presley died due to heart failure, at the age of 42. His addiction to the prescription drugs cost him his life and later ruled that it was the cause of his death.

What The Pop Culture Know About Elvis Presley

Since his death, Presley remained as one of the world’s most prolific music icons.  During his entire career, he had helped to popularize rock n’ roll music in America. He also won three Grammy Awards for his gospel recordings. A major musical force, Presley had 18 No. 1 singles, including “Don’t Be Cruel,” “Good Luck Charm” and “Suspicious Minds,” as well as countless gold and platinum albums. He was one of the first performers inducted into the Rock and Roll Hall of Fame (1986).