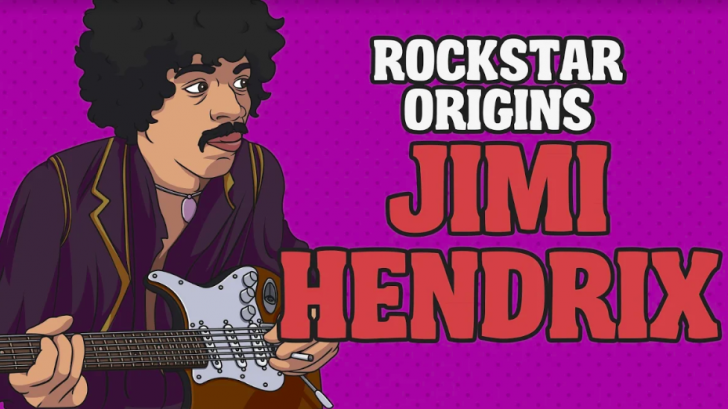 Even in his short-lived life and career, Jimi Hendrix cemented himself as one of rock n’ roll’s greatest artists that ever lived. All through the 1960s, Jimi delighted audiences with his very unique and innovative electric guitar playing skills and his experimental sound.

He was a trailblazing rebel who was successfully daring at trying out new things, living life to the beat of his own drum, and the sound of his own guitar. One of his most memorable performances was at Woodstock in 1969, where he performed a riveting rendition “The Star Spangled Banner” on electric guitar. At only 27 years old, Hendrix succumbed to his drug addiction and died in 1970. Even at a young age, he definitely made a legacy and left his mark on the world of rock and roll. His career and influence are as equally interesting as his roots and origins. Here we take a look at how the legendary Jimi Hendrix began his career.

His mother Lucille was only 17 when she had Jimi. She also had a serious alcohol problem and would disappear for extended periods. Jimi’s parents eventually divorced in 1951, and Al Hendrix won custody of his sons. Jimi’s father raised him his brothers, Leon and Joseph, as did their grandmother and various family friends, which led to quite a difficult childhood.

When he was a child, Jimi’s first “guitar” was a broom, and he would play it like the stringed instrument he would eventually become an expert at. He moved on to a one-stringed ukulele after the broom. When he was 12 years old, his father got him a real guitar and he taught himself how to play it. Being a lefty, Jimi restrung the guitar upside down, turning the instrument in the opposite direction from how it is usually played so he can play it properly. He was inclined to play the blues from his greatest influences, B.B. King and Muddy Waters.
The Rocking Kings
In 1959, Jimi dropped out of high school and worked odd jobs to have time to pursue his musical aspirations. By his mid-teens, Hendrix had formed a band called the Rocking Kings. When Hendrix was 17, his father bought him his first electric guitar—a right-handed Supro Ozark. He also had to restring that and flip it upside down to be able to play it and do his amazing guitar tricks on it.
Jimmy James and the Army
In 1961, following in his father’s footsteps, and to avoid a jail sentence for riding in a stolen car, Jimi enlisted in the United States Army, training as a volunteer paratrooper. Even in training, he couldn’t get away from music and still found time to play and perform, forming a band named the King Kasuals with his fellow-soldier, bassist Billy Cox.Hendrix was honorably discharged from the army after injuring himself during a parachute jump in 1962.

After army life, Jimi continued to pursue his music career as a session musician under the name Jimmy James. He played backup guitar for Little Richard, King Curtis, Sam Cooke, and the Isley Brothers. Still under the stage name Jimmy James, he formed a band of his own called Jimmy James and the Blue Flames in 1965. His new group played gigs around New York City’s Greenwich Village neighborhood.

Beginning the Experience
Chas Chandler, the bass player of the British rock group the Animals, brought Hendrix to London in September 1966 and signed on to be his manager. It was Chandler who suggested changing the spelling of Hendrix’s first name to “Jimi” instead of Jimmy. Chandler convinced Hendrix to go to London and helped form the Jimi Hendrix Experience, joining with bassist Noel Redding and drummer Mitch Mitchell. They began recording their first album Are You Experienced?
In London, Hendrix made a name for himself and was on the same league as other rock royalty, with the Beatles, the Rolling Stones, the Who and Eric Clapton. Many great established artists and musicians recognized and praised the work and talent of Jimi Hendrix. A review from the British music magazine Melody Maker said that Hendrix “had great stage presence” and was so good that it looked like he was playing the guitar with no hands at all, what with spinning it up and over and around his body while still playing the instrument.
The band had released its first hit single, “Hey Joe” to great success.
Crowds were lining up just to get a glimpse of Hendrix’s wild performances, which included setting his guitar on fire. Hendrix was climbing the top of the charts and catching the fascination of his audiences around the world.