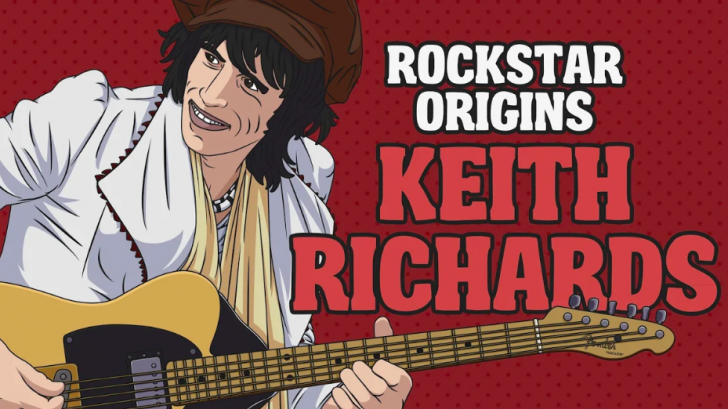 Keith Richards, one of the most famous living legends of rock n’ roll, a vital and irreplaceable member of the self-proclaimed “World’s Greatest Rock & Roll Band”, the Rolling Stones, is not just one of the most famous guitarists of all time but a survivor of the wild life of sex, drugs, booze and everything in between that comes with being a rockstar. His influential guitar technique and his flamboyant and unique looks cemented him as a rock icon.

His 50-year career has been a very interesting one, but we all already knew that. Equally interesting is how he got started — his roots and his origins. Here we take a look at how, where, and when the famous Keith Richards began his storied career.

Keith Got The Blues At 3 Years Old

Born on December 18, 1943, in Dartford England, Keith says he got the music bug aged at just three years old. He started listening to Blues legends like were Ella Fitzgerald, Sarah Vaughn, Big Bill Broonzy and Louis Armstrong at a very young age. Richards was in inspired and awestruck after seeing the 1956 film, Low Light, and Blue Smoke: Big Bill Blues, and that’s when he got the bug. “It was a classic video before its time,” says Richards.

Richards’ grandfather, who was a musician and a bandleader was an early influence on the future Rolling Stones rhythm guitarist. His mother, Doris, also had a great ear for music. Richards started singing as a child, performing in choirs at school and that’s when he started developing a passion for music and singing. One of his first ever singing gigs was when he sang at the coronation of Queen Elizabeth II in 1953 as part of a school choir.

Around the age of 15, he got his first guitar as a birthday gift from his mother. He taught himself how to play his instrument, learning on his own popular songs from his childhood like Elvis Presley’s “That’s All Right, Mama” and Chuck Berry’s “Maybelline”.From Little Boy Blue and the Blue Boys to the Rolling Stones

Keith Richards wasn’t really a good student in school. In fact, he was expelled from Dartford Technical School for always skipping class. Dartford’s headmaster suggested Richards attend Sidcup Art School instead but that didn’t work out well either as Richards spent more time doing music than studying art. It was in that art school, however, where he met guitarist Dick Taylor, who was at the time, in a band with a certain singer named Mick Jagger. Richards already knew Jagger from when they were kids growing up in Dartford. He joined their little music group Little Boy Blue and the Blue Boys, which by 1963 became the Rolling Stones.

A Rockin’ Life With The StonesThe Rolling Stones were marketed by manager Andrew Loog Oldham as a blues-rock band consisting of rough-and-tumble but talented boys.Tha band’s early music was mostly cover versions of other people’s popular songs, but it wasn’t long until Richards and Jagger, along soon became a powerful songwriting team—occasionally using the pseudonym “Nanker Phelge”. The Rolling Stones first made the U.K. charts in 1964 with a cover version of Bobby Womack’s “It’s All Over Now.” The band’s self-titled debut album was released the same year. They toured the United States shortly after their album debut and their songs became chart-topping hits one after the other. Throughout the next few decades, the band would be releasing hit albums, and securing their position as one of rock n’ roll’s most iconic figures of all time.