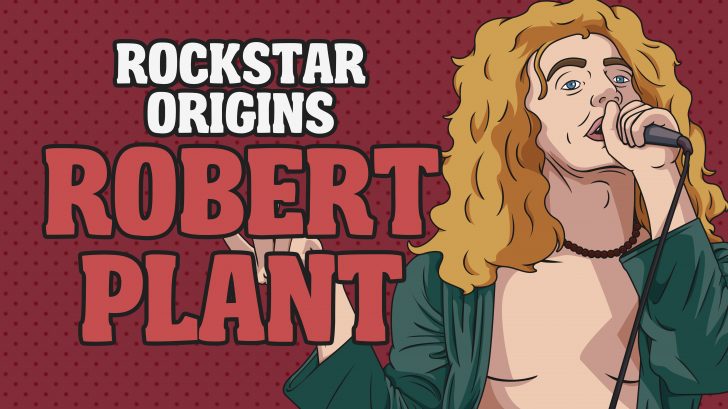 Robert Plant is one of the most well-known rock singers of all time, having fronted the iconic rock band Led Zeppelin for almost two decades. In his long and on-going career, he was able to create and present a rock god persona with his unique and mesmerizing stage performance. With his long curly blonde hair, flamboyant clothing, bare chest, signature body movements, and of course, his unmistakable singing voice, Robert Plant cemented himself as one of the greatest living rock icons of all time. Here we take a look at how, where, and when the great Robert Plant became the rock god that he is today.Inspired by The King

Advertisement
Robert Anthony Plant was born on August 20, 1948, in Bromwich, Staffordshire, England. At a very young age, he was mesmerized by the King of Rock N’ Roll himself Elvis Presley and sparked an interest in singing and music. He would, as he said himself, “Hide behind the curtains at home at Christmas and I used to try to be Elvis.”In 1966, at 18 years old, Plant left school to work on his music career.
Bitten by the Blues Plant fell in love with the blues sound of Willie Dixon and Robert Johnson in his youth. He attended King Edward VI Grammar School for Boys in England but he knew he had a future beyond grammar school set out for him. As he left school and focused and his music, he began performing with a number of groups showing his penchant for playing blues music. At age sixteen, Plant “started my real education musically, moving from group to group, furthering my knowledge of the blues and of other music which had weight and was worth listening to.”Plant then formed his own band called Band of Joy with drummer John “Bonzo” Bonham. Early in his career, he also recorded three R&B singles for CBS records on his own, though that didn’t gain much attention.

From The New Yardbirds to Led Zeppelin In 1968, Plant was actually discovered by now-legendary guitarist Jimmy Page who was in search of a lead singer for a new band he was forming, called the New Yardbirds. After hearing Plant perform, Page was amazed. Page shares,  “When I auditioned him and heard him sing, I immediately thought there must be something wrong with him personality-wise or that he had to be impossible to work with, because I just could not understand why, after he told me he’d been singing for a few years already, he hadn’t become a big name yet. So I had him down to my place for a little while, just to sort of check him out, and we got along great. No problems.” Plant joined the group, and in turn, recommended drummer Bonham to Page. They then added John Paul Jones as the fourth member of the group. Jones was recruited as the bassist/keyboardist.

The four guys started playing together at a record shop on Gerrard Street in London and went on a short Scandinavian tour in 1968 as the New Yardbirds. They recorded their live sets and made their first album out of that, with Page covering the costs himself. After the album was complete, the band was forced to change their name due to a cease and desist order from musician Chris Dreja who was part of a band called Yardbirds. The band came up with “Led Zeppelin” because some people in the band stated that they would all go down like a “lead balloon” which was a British idiom for “disastrous results.” The results have been the opposite of disastrous until the untimely disaster of Bonham’s sudden death the world did not expect.
Life-Changing Losses
In 1977, while he was away on tour in the United States, Plant’s 6-year-old son Karac suddenly died from a viral infection. Of course, Karac’s death hit Plant and his family hard. Plant subsequently canceled the tour, and Led Zeppelin went on hiatus for a year and a half, returning only in late 1978 to work on recording In Through the Out Door, which little did they know would be their last album.As they were preparing for a tour to promote their latest album, John Bonham suddenly died at Jimmy Page’s house in September 1980. Bonham’s excessive drinking had caused him to accidentally choke on his own vomit that would be his demise.Instead of replacing Bonham, Page and Jones decided to disband Led Zeppelin than continue without their beloved drummer.