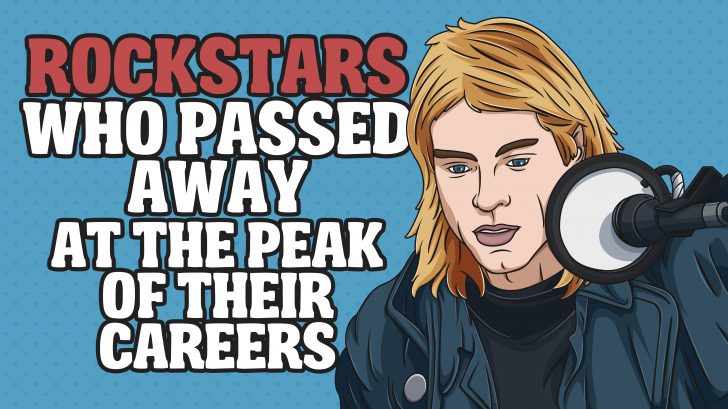 We may put them on a pedestal and consider them as gods but at the core, they’re still very much human. And just like all of us, they are mortals and could succumb to death anytime. But what sets the following musicians apart is the fact that they died at their prime – either their careers were still taking off or they already managed to break into mainstream and were slowly becoming a household name.

Every passing is unfortunate and heartbreaking but even more so since they were at the top of their game. Try to go through this list without crying.

His only complete studio album “Grace” is often hailed as one of the greatest records of all time. He was working on his second album when he died. It was ruled as accidental drowning but many found it suspicious since he went swimming in the Wolf River Harbor fully clothed and wearing boots.

Cliff Burton’s last album with Metallica was “Master of Puppets” which was both critically acclaimed and commercially successful. A little over six months after it was released, the band had a bus accident while they were touring and Burton died after he was thrown through the window and the vehicle fell on top of him.

Even at a young age, he already had numerous accomplishments under his belt. He opened for Elvis Presley three times and his band “The Crickets” found massive success from chart-topping hits like “That’ll Be the Day” and “Peggy Sue.” He also inspired and influence other rock legends including The Beatles and Eric Clapton. In 1959, his plane crashed killing him and other musicians instantly.

His band became a massively influential rock group and he is hailed as one of the greatest guitarists of all time. He was also a sought-after session musician and has played alongside other legends like Eric Clapton and Wilson Pickett. Shortly after the release of their first live album, he died in a motorcycle accident.

The Rock and Roll Hall of Fame referred to him as “arguably the greatest instrumentalist in the history of rock music” and for good reason. He has achieved international fame and success with his band The Jimi Hendrix Experience and he wowed the audience in several music festivals including Monterey Pop Festival, Woodstock and The Isle of Wight Festival. But in 1970, the world was a gloomier place when he died from barbiturate-related asphyxia.

Janis Joplin shocked the whole world when she died while working on her second and what would be her final album. “Pearl” was released posthumously and topped the Billboard 200 for nine weeks. It was also certified quadruple platinum by the RIAA.

After having achieved mainstream success with several of his hits dominating the radio and MTV, Kurt Cobain’s death was something very few saw coming. Although it was ruled as suicide, there are still some mysteries surrounding it.