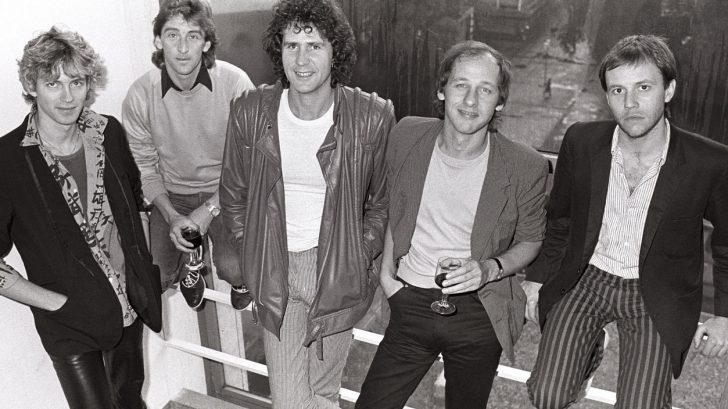 There are only 10 days to go until the Rock and Roll Hall of Fame Induction Ceremony, and Dire Straits fans are disappointed beyond belief.

It was announced earlier this week that the band will perform at the April 14th ceremony as planned, but one face you won’t see in attendance as the Dire Straits accept their induction is Mark Knopfler, who for unknown reasons has backed out of the big event.

Keyboardist Alan Clark took to his official website to break the news in an indirect sort of way, saying:

“There’s a lot of conjecture on forums about whether the band is performing at the Hall of Fame, and if not why not, and who in the band are going to the ceremony. Well, here it is and it’s official: Myself, Guy Fletcher and John Illsley will attend the ceremony where we’ll be be performing an unplugged version of “Telegraph Road,” with me on harmonium, Guy on ukulele, John on banjo, and the vocal sung by Stevie Wonder.“

Mark isn’t the only Knopfler skipping the ceremony. His brother, David, who played on Dire Straits’ first two albums, won’t be there either, and he’s got a pretty interesting reason as to why. While responding to a question on Facebook, David revealed that his decision to skip the induction ceremony came down to two things: travel costs, and a broken promise.

“In their wisdom after promising to pay my expenses they reneged on their promise,” Knopfler begins.

“I can well understand that with only $5 mil a year in sponsorships and 100k a table and no fees for the artist that paying my taxi to the airport must have given them heart murmurs like Squeers hearing Oliver Twist asking for more and frightened them into refusal otherwise one might get the wrong idea entirely about what they’re all about.”

He also brought up another good point. Work visas aren’t exactly cheap, and in order to come stateside and perform with Dire Straits, David would have to fork over £1500 – around $2100 USD – in addition to his other expenses. “It’s starting to sound a bit expensive isn’t it?” he quipped.

While it’s disappointing that Mark and David won’t be there to celebrate Dire Straits’ big moment, it’s understandable why they’d choose to bow out and appreciate it from afar. As the Rock and Roll Hall of Fame takes more and more criticism from different artists throughout the years, it makes you wonder: when will the Rock and Roll Hall of Fame finally be about the bands?