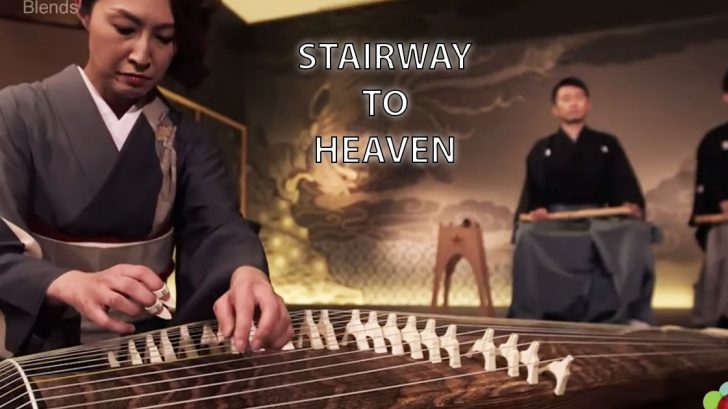 Led Zeppelin’s 1971 classic hit “Stairway To Heaven” is already a song that has a life of its own. The legacy and worldwide popularity of this track is part of rock history. It’s a feat to even cover it with an actual electric guitar the way Jimmy Page played it on the record, more so on a totally non-rock instrument: a Nijugen-Koto. While that may be a mouthful, let us first find out what the Nijugen-Koto is. It is a 21-string Japanese traditional musical instrument. The name Nijugen-Koto literally means 20-strings on a Koto.

A quartet of talented Japanese musicians performed a cover of the Led Zeppelin classic with the ladies Keiko Hisamoto and Masako Watanabe on the Nijugen-Koto while the guys Hiromu Motonaga and Kizan Kawamura accompany them on wooden flutes called “shakuhashi”.

Led Zeppelin would definitely be interested in hearing this unique cover of their song.

NHK Blends, a quartet of musicians perform a cover version of Led Zeppelin’s 1971 Stairway To Heaven in Japanese style, played on 21-string Nijugen-Kotos and wooden flutes.